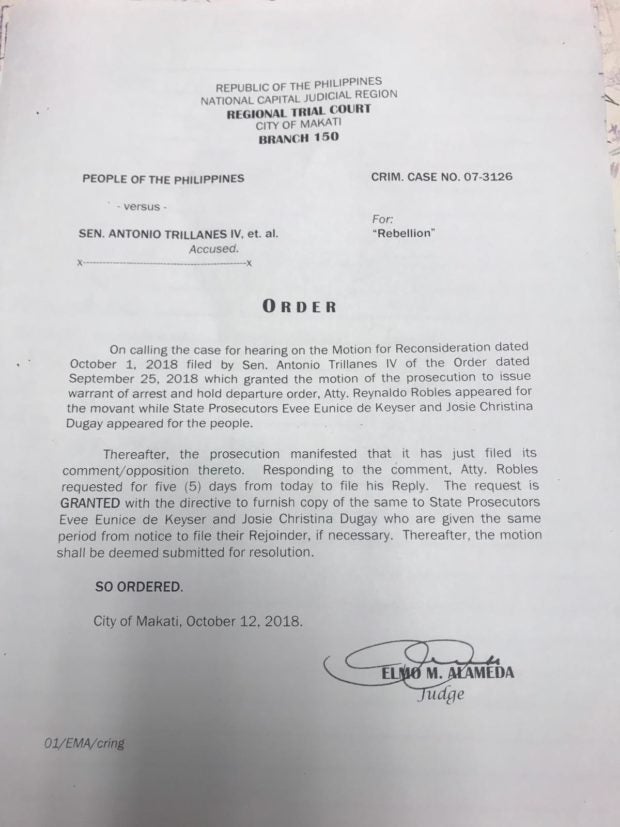 The Department of Justice (DOJ) has opposed the bid of the camp of Senator Antonio Trillanes to set aside the order of arrest and set his rebellion case for hearing to present evidence.

Last month, Makati RTC Branch 150 ordered the arrest of Trillanes and required him to post a P200,000 bail for his temporary liberty.

Trillanes, through Atty. Reynaldo Robles then filed a motion for reconsideration insisting that what was conducted before the court is a mere summary hearing.

The comment submitted by the DOJ was in response to the senator’s motion and asked that it be dismissed.

During Friday’s hearing, Robles told the court that they were not able to present evidence.

“[But] you filed your opposition plus documents,” Judge Alameda said to which Robles replied that the Makati court did not consider the evidence they have included in their comment.

“The court would like to give you the opportunity [to present your side]. Did the court not ask you questions [during the hearing],” Alameda said.

“What the court wants is the primary document, the hard copy, Xerox copy,” Alameda said referring to the actual application form submitted by Trillanes when he applied for amnesty.

Upon submission of the rejoinder, Alameda said the court will determine if there is still a need to conduct another hearing for the presentation of evidence.  /muf