Reelectionist Senator Aquilino “Koko” Pimentel was the first to file the certificate of candidacy for the 2019 midterm elections.

Pimentel is running for a Senate seat under the banner of the ruling Partido Demokratiko Pilipino-Lakas ng Bayan (PDP-Laban) which he leads as president. 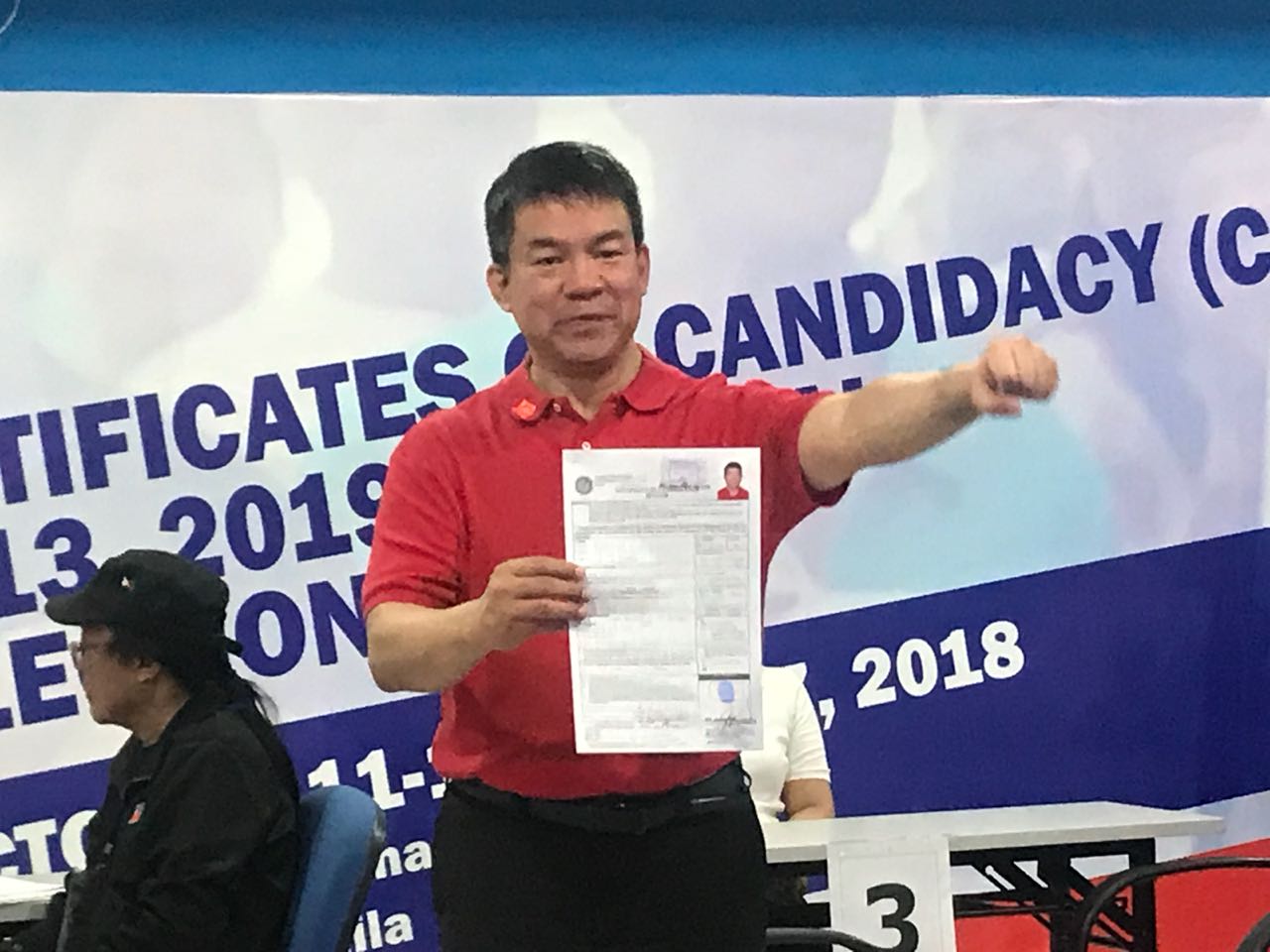 “There is unfinished business to be pursued at the Senate,” he told reporters shortly after filing his certificate of candidacy.

Pimentel said he wants to be an early bird at the first day of filing of COCs since he still has to think about his wedding with fiancée Kathryn Yu next week. Yu also accompanied Pimentel at the Commission on Elections.

LIVE: Day 1 of filing of Certificates of Candidacy at the Comelec main HQ in Intramuros for the 2019 midterm elections.

The couple wore red during the filing, which the senator said would be the color to be used by the PDP-Laban in the 2019 elections.

“That is the revolutionary color. Ibig sabihin (It means), PDP-Laban entertains radical ideas on how to solve our problems. [We think] out of the box on how to solve the problems,” he said.

He said he also urged his partymates to wear the same color when they file their respective certificates of candidacy.

Pimentel said PDP-Laban’s senatorial slate has been trimmed to only “five or six” from the  initial list of  24 names.

However, the senator has declined to identify those who are included in the list. /muf

READ: PDP-Laban Senate bets down to 5 or 6 – Pimentel

Read Next
Comelec opens for COC filing for 2019 elections
EDITORS' PICK
PH to import 60,000 tons of fish to cover shortage
Gear up and get ready to play with Yamaha Mio Gear
Over 3 Million worth of prizes to be won at Smart Padala’s SENDali Manalo Promo!
Acer starts the year off strong with the Aspire Vero National Geographic Edition
#VotePH2022: COVID, power woes loom as poll concerns
Workers are exempted from ‘no vax, no ride’ policy – DOLE chief
MOST READ
Guevarra to Acosta: Obey rules on unvaccinated
PH to import 60,000 tons of fish to cover shortage
Emma Stone calls Andrew Garfield a ‘jerk’ after he ‘lied’ about his ‘Spider-Man: No Way Home’ appearance
Cold-case investigation names surprise suspect in Anne Frank’s betrayal
Don't miss out on the latest news and information.