PDP-Laban Senate bets down to 5 or 6 – Pimentel 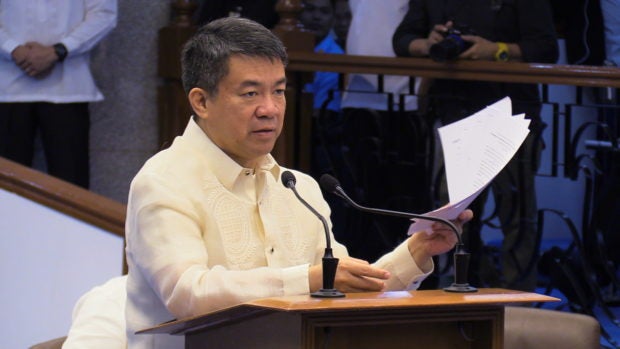 From 24, the list of the Partido Demokratiko Pilipino-Lakas ng Bayan’s (PDP-Laban) possible senatorial bets for 2019 has been trimmed to only “five or six.”

Senator Aquilino “Koko” Pimentel III, PDP-Laban president, disclosed this Thursday, barely a week before the start of the filing of the certificate of candidacy for next year’s polls.

“Mga lima, anim,” Pimentel told reporters at the Senate on Thursday when asked how many were left on the list.

He refused to identify the remaining candidates, who are all PDP-Laban members,  saying they would announce the list next week.

“If ever hindi kami maka kumpleto, then the campaign manager will have the flexibility of entering into alliances because remember the reelectionists have their own parties,” the senator said.

In a letter to President Rodrigo Duterte last August, Pimentel gave the names of 24 possible senatorial bets, including some  senators who are up for re-election next year. Duterte is chair of the party.

The senator said some of those on the early list had backed out or decided to run for other posts.

He said Davao City Rep. Karlo Nograles, chair of the House of Representatives’ committee on appropriations, would no longer run for senator, while Quirino Rep. Dakila Carlo Dax Cua would be running for governor in his province.

“We will tighten or we will be very strict in our vetting or selection procedure. And if we don’t complete the slate, so be it,” Pimentel said.

The PDP nominees, he said, must be advocates of federalism, must have fully complied with membership requirements, must have served the party, and must participate in party activities and not only show during the filing of COCs.

“There’s no shortcut to being official candidate of the party,” Pimentel said. /cbb