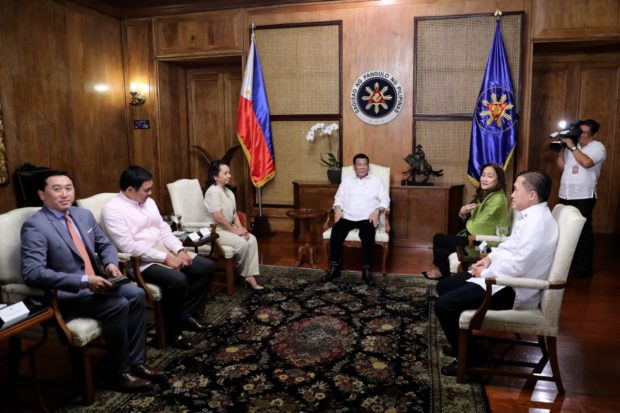 Photo from the Office of the Speaker

President Rodrigo Duterte has requested House Speaker Gloria Macapagal-Arroyo to include in the 2019 national budget funds for housing projects that would benefit members of the Armed Forces of the Philippines and the Philippine National Police, among others.

This happened during a meeting in Malacañang on Tuesday, the Speaker’s Office said in a statement on Wednesday.

Arroyo’s office also said Duterte requested that the funding for the water system of the housing project for victims of super typhoon Yolanda be included in the General Appropriations Bill.

The lower chamber approved the proposed 2019 budget on second reading on October 3 and is now undergoing amendments before a small committee.

Moreover, the Speaker’s Office said Arroyo committed to the President a Joint Resolution of the House and the Senate to “extend the validity of the P19.6B National Disaster Risk Reduction Management Fund for rehabilitation of Marawi City until the end of next year.”

The two leaders also discussed several legislative measures pending at the lower chamber, including the conduct of a bicameral conference on the coco levy fund bill, according to the Speaker’s Office.