Woman who pointed to cops as assailants in Cebu killings gets shelter in Archbishop’s Residence
By: Benjie B. Talisic, Jessa Mae O. Sotto, Morexette Marie B. Erram - @inquirerdotnet
Philippine Daily Inquirer / 05:19 AM October 10, 2018 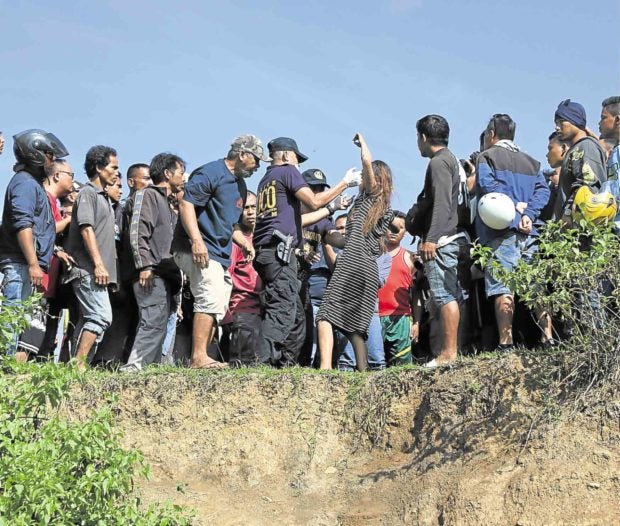 ALIVE Reporters and village officials reach out to Sharmaine Puran (in striped dress), who survived execution in Cebu City by rolling down a hill. —TONEE DESPOJO/CEBU DAILY NEWS

CEBU CITY — One of two survivors of an apparent summary execution of drug suspects here has been given refuge by the Church after she was discharged from hospital on Saturday.

Sharmaine Puran, a suspected drug courier, was allowed by the Church to stay at the Archbishop’s Residence pending results of an investigation.

Puran survived the Oct. 11 gangland-style shooting of seven persons on a hilly village in the city which led to the killing of five of them.

The other survivor was Antonio Belande, driver of a habal-habal, or motorcycle being used for public transport.

Puran and Belande had pointed to policemen as perpetrators but the Central Visayas police vehemently denied any involvement in the killings which coincided with a One-Time, Big-Time antidrug operation in Cebu City and Talisay City.

Belande, who had narrated his ordeal to media, went home after being released from hospital on Sunday and sought police protection.

Belande was escorted home by police.

Leo Villarino, regional investigator of the Commission on Human Rights (CHR), said the CHR continued to hope that Belande would seek help from the agency and provide information.

Msgr. Joseph Tan, spokesperson of the Archdiocese of Cebu, begged off from issuing any statement regarding Puran, saying the Church was giving her “pastoral custody.”

Cebu Archbishop Jose Palma, who has been critical of killings in President Duterte’s war on drugs, has also kept mum.

Belande and Puran, in separate interviews, had told reporters that they and five others were taken by six armed men from the village of Guadalupe, forced into a white van and taken to Malubog.

Both said they hid behind the bushes below the Transcentral Highway in Malubog after they were able to flee their captors.

Belande said he and another habal-habal driver, Christopher Tangag, were hired to bring two passengers to Guadalupe on Oct. 3 when they were accosted by men who identified themselves as policemen.

Belande said he and Tangag were picked up outside a mall and condominium around 5 p.m.

They were blindfolded, their hands tied with plastic restraints and brought past midnight to a secluded area in Malubog.

He said he ran and rolled down the ravine after he saw that the other captives were being shot.

He said he was wounded when the captors continued to shoot at him.

Belande crawled out of his hiding spot when reporters and village officials arrived.

Puran did the same later, emerging from the bushes.

Sinas said the executions could be the work of a drug syndicate.