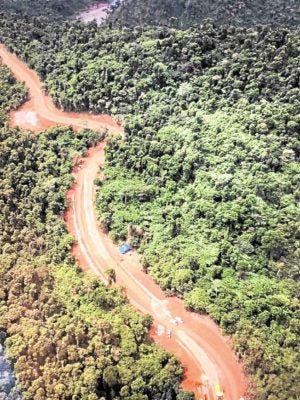 A sibling rivalry may be brewing in Luzon’s biggest province.

Isabela Rep. Napoleon Dy on Tuesday called out his brother, Gov. Faustino “Bojie” Dy III, over a P1.6-billion road project in the province which, he said, had remained “half-done” more than two years after construction started.

In a statement, Dy described the 82-kilometer Ilagan-Divilacan Road as “overpriced, half-finished, anti-environment and full of irregularities.”

He urged his brother and Vice Gov. Tonypet Albano to “come clean regarding this project for the sake of transparency.”

“This is not about politics. This is about accountability and good governance,” the lawmaker said.

“The billions (of pesos) loaned by the provincial government will be paid for by Isabela taxpayers and they deserve to know what happened (to) this project,” he said.

Dy, vice chair of the appropriations committee of the House of Representatives, claimed that the provincial government had already spent some P39 million for every kilometer of the project.

“The project is obviously overpriced,” he said, adding that even the initial budget of P20 million per kilometer was already more expensive than the usual cost set by the Department of Public Works and Highways.

The lawmaker also raised concern over the environmental impact of the road construction, which the provincial government rolled out in March 2016.

He wanted to know what happened to the trees that had been cut down to pave the way for the road, which crossed into portions of the Isabela National Park and protected areas within the Sierra Madre mountain range.

In addition, Dy said P1 billion of the funds spent for the project was originally allocated by the provincial government for the purchase of heavy equipment.

“Where is the (P1 billion) worth of heavy equipment that were purchased with the funds? How much more does the provincial government need to complete this project?” he said.