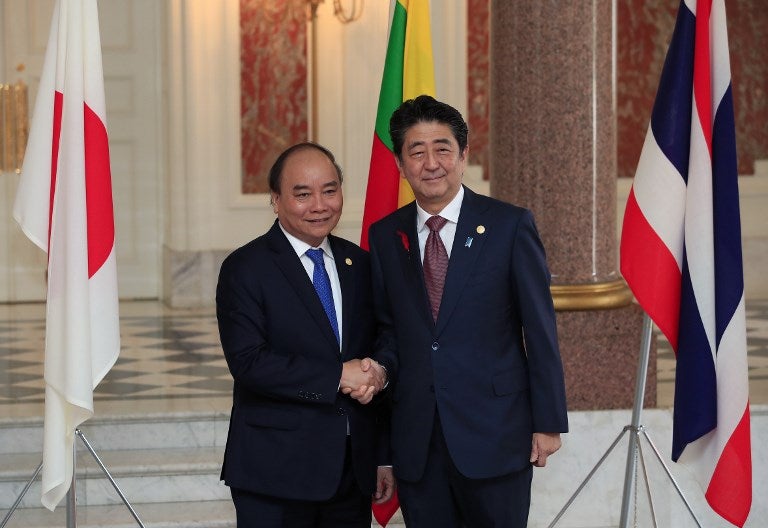 HANOI – Vietnam and Japan have pledged to advance their strategic partnership for peace and prosperity in Asia during talks between Vietnamese Prime Minister Nguyen Xuan Phuc and his Japanese counterpart Shinzo Abe.

Vietnam and Japan would cooperate closely to promote their extensive strategic partnership for peace and prosperity in Asia in a new period of more comprehensive and pragmatic development, said Prime Minister Nguyen Xuan Phuc.

At a joint press conference following his talks with Japanese Prime Minister Shinzo Abe yesterday, the Vietnamese government leader said that the two sides had also agreed to enhance political trust through regular high-level visits and meetings, utilizing dialogue mechanisms and stepping up result-oriented co-operation in national defence and security, as well as people-to-people exchanges.

At the same time, the two sides would strengthen their affiliation in administrative reform, e-governance and productivity improvement, along with other areas such as high-quality agriculture, the environment, education-training, culture, tourism, healthcare, sports, firefighting and people-to-people exchanges.

They pledged to work together for the success of the Mekong-Japan Summit Meeting and to promote ASEAN-Japan relations as Vietnam co-ordinates the ASEAN-Japan Dialogue for 2018-2021.

Vietnam welcomed and backed Japan’s efforts and initiatives to ensure prosperity, free trade and navigation safety in the Indo-Pacific region on the basis of the UN Charter and international law with respect for independence and sovereignty for peace, stability, co-operation and development in the region and the world alike, he said.

Vietnam attached importance to the role of Japan in the current situation, the leader said.

Regarding the East Sea issue, PM Phuc said Vietnam and Japan had reiterated the significance of ensuring peace, security, safety and freedom of aviation and navigation in the area, and not using or threatening to use force.

They showed their support for the settlement of disputes by peaceful measures on the basis of international law, the 1982 United Nations Convention on the Law of the Sea (UNCLOS) and respect for diplomatic and legal processes.

Both sides highlighted the need to fully and effectively implement the Declaration on the Conduct of Parties in the East Sea (DOC) and finalise an effective and legally binding Code of Conduct in the East Sea (COC), the PM said.

He used the occasion to express his sympathies to Japan over huge losses caused by Storm Trami recently.

Speaking at the press conference, PM Shinzo Abe extended his condolences over the passing of President Tran Dai Quang and former General Secretary of the Communist Party of Vietnam Central Committee Do Muoi.

He said Vietnam’s sustainable development played an important role in peace and prosperity in the Mekong region, pledging that Japan would continue its strong support for Vietnam in building high-quality infrastructure, administrative reform, industrial development, productivity and energy.

The host said that in 2019 when Vietnam and Japan hold the Japan-Mekong Exchange Year, Japan would further expand people-to-people exchanges between the two countries.

Japan would continue to intensify personnel training with Vietnam via the Asia Health and Wellbeing Initiative and the Japanese language education initiative, he promised.

The two sides agreed to take measures to prevent and handle companies that sent or received illegal Vietnamese guest workers.

Given growing global protectionism, Vietnam and Japan would continue to send messages of trade liberation and equal and free investment through the CPTPP and RCEP.

PM Abe said he would work closely with PM Phuc to contribute to the success of the ASEAN-Japan Summit Meeting to boost bilateral cooperation.

Abe said he and his Vietnamese counterpart agreed to boost coordination in regional and international issues, including the Korean peninsula and East Sea.

The leaders expressed their resolve to deepen bilateral ties for peace and prosperity in the region and the world at large.

At the end of their talks, the two PMs witnessed the signing of co-operation documents between ministries, agencies and businesses from the two countries.

The documents included a diplomatic note of exchange on non-refundable aid to enhance the capacity of Vietnam’s Reference Testing and Agrifood Quality Consultancy Centre in order to ensure food safety of agro-forestry-fishery products.

The Vietnam Football Federation will team up with the Japan Football Association, and the Vietnamese Ministry of Education and Training (MoET) and Mizuno Group of Japan will be looking at physical education in Vietnamese primary schools.

An agreement between the MoET and Japan’s National Police Agency and ministries of justice, foreign affairs, and education, culture, sports, science and technology on affairs relating to overseas Vietnamese in Japan was also inked on the occasion.

They also witnessed the signing of a BOT contract between the MoIT, Sumitomo Group and Van Phong Power Company Limited on the Van Phong 1 thermal power plant.