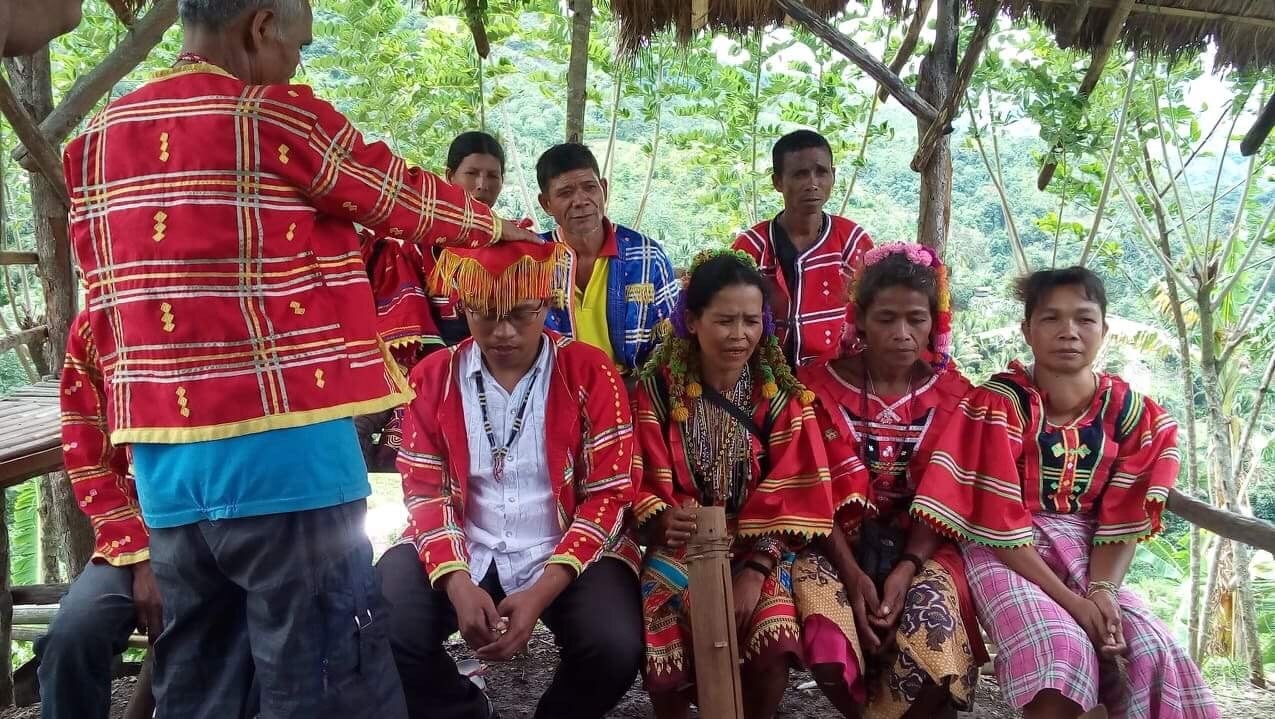 HONOR BESTOWED A Matigsalug elder prays over Ruel Janamjam during a ceremony in February 2016 that made him an honorary datu of the Davao City tribe. —CONTRIBUTED PHOTO

The dawn sky over Sitio Upian, a farming community at Barangay Marilog, Davao City, still bores the faint twinkle of distant stars as the 12 men and women began to pray — rhythmic and urgent in their native Matigsalug tongue.

Garbed in embroidered red clothes, they placed their hands over Ruel Janamjam’s head to bestow upon him the tribal community’s highest honor: the title of datu, or chieftain.

But the bespectacled Janamjam, 37, had no royal blood and was not a Matigsalug. Instead, he was of an equally august pedigree: He is a teacher.

“Being a teacher isn’t different from being a leader,” Janamjam said. “Both seek to inspire and to change lives by setting a good example. [That’s] also what I want to do for them.”

To the Matigsalug, he is Datu Kasandihan: “Masasandalan at masasandigan sa oras ng pangangailangan” (reliable and steadfast in times of need).

His hands are a bit rough, not because of the classroom chalk but because of the soil, as he has helped the riverside tribe reclaim their ancestral land and turn them into the farmland that they are now. 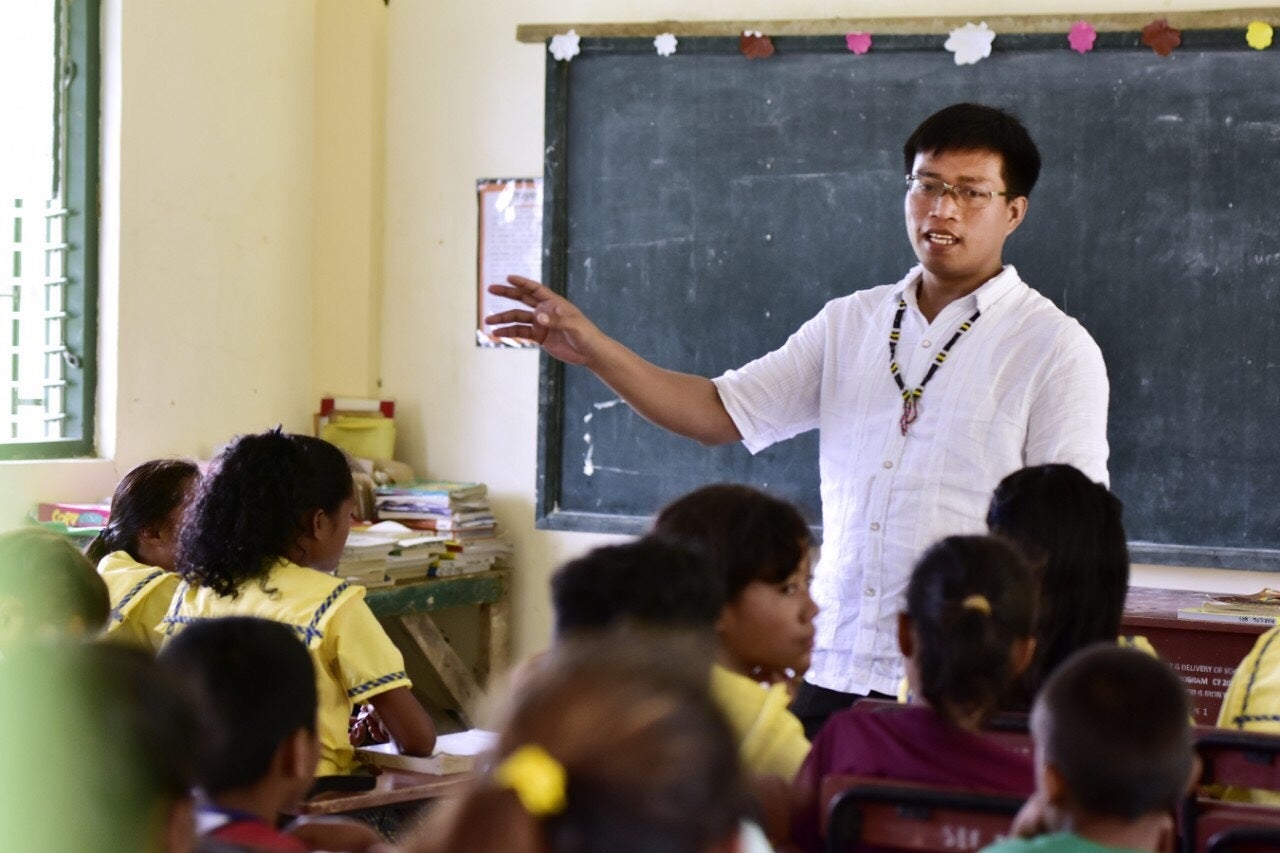 GUIDING LIGHT As Datu Kasandihan and teacher to the tribe’s children, Janamjam has gained a unique understanding of the Matigsalug and their struggles. —CONTRIBUTED PHOTO

His unique role as both educator and tribal leader in making the Matigsalug a more self-reliant community has earned him this year’s Many Faces of the Teacher award, given by Diwa Learning Systems and Bato Balani Foundation in time for World Teachers’ Month.

He is cited, among others, for “going beyond the four walls of the classroom” to transform the lives of the indigenous people.

But Janamjam, an elementary education major from Western Mindanao State University, said he never dreamt of becoming a tribal chief.

“Being a datu is a sacred [entitlement], dearly protected by the Matigsalug,” he said. “It is not a regal life. Most of the time, your life is at stake, because you have the power to decide for the entire tribe.”

Still, the life he lives now is a stark contrast to his hapless childhood in Zamboanga Sibugay, about 560 kilometers west of Davao City.

Separated from his parents and his seven siblings at a tender age, Janamjam was forced to work from barrio to barrio in Malangas town as a farmhand or houseboy to sustain himself until high school.

Every morning he labored over math and English studies. In the afternoon he worked the soil. In between he cultivated his first and only dream job: becoming a teacher.

When he was 28, Janamjam married his wife, Jocelyn, with whom he has an 8-year-old son, Kylon. She, too, is a teacher.

He first met the Matigsalug, a small riverside tribe that traces its lineage to the Manobo of Bukidnon province, in 2013, when he was assigned to teach at Pegalungan Elementary School in Davao City.

They are a “cheerful, kindhearted people” whose daily lives are heavily influenced by their animistic beliefs, Janamjam said. Rituals mark harvest time or other important occasions so the tribe can thank the gods of nature for the blessings.

But the richness of their culture does not translate to a better livelihood, he said.

Though relatively safe from the usual perils like militarization and the communist insurgency faced by other indigenous tribes, the Matigsalug often suffer the pangs of hunger as unscrupulous people sell off portions of their ancestral land to private owners.

It was worse in Sitio Upian in 2015, when he was transferred to the area to work as a high school teacher.

To get to Upian Elementary School, students have to walk four to five hours along mountainside trails and riverbanks from the national highway.

Seeing the students’ sad plight, Janamjam lobbied the provincial government to pave roads near the school and to provide funds for the establishment of an extension building for Grades 7 and 8 students.

The school itself stood on arable land, so he integrated agriculture classes into the students’ curriculum. Soon the students were planting crops like cacao, rubber and banana.

“I didn’t have a solid background myself in agriculture,” Janamjam admitted. “But I was determined to help them become more self-reliant. They needed food to focus on their studies, to learn better.”

Impressed by how much he has transformed Sitio Upian, the 12-member tribal council made Janamjam an honorary datu in February 2016. He believes he is the first outsider to be honored as a chieftain by the tribe.

The council, made up of eight male datus and five women “bais” (priestess), is both a court and a republic, Janamjam said. It serves as an arbiter in crimes committed by the “lumad” (indigenous people in Mindanao) against one another and has the final say on major tribal decisions, particularly land disputes.

In November 2017, he recalled, a representative from a mining company came to Sitio Upian and offered each family P1 million to relocate to other areas and allow the company to mine their land. The tempting offer split the council.

But Janamjam, angered by the prospect of mining violating the tribe’s ancestral lands, challenged the company representative to give each family P500,000 in immediate down payment lest he would “force him to eat paper.”

The offer did not prosper.

But perhaps the most curious power of the Matigsalug datu is his authority to seize ancestral land from private owners, if necessary. Janamjam has yet to exercise this power, which, he says, is legitimized by Republic Act No. 8371, the law that protects the rights of the indigenous peoples over their domain.

Presently, Janamjam is negotiating with a Cebuano land owner to give up 5 hectares of his 20-ha possession in Upian. He said he planned to build a high school on 2 ha, and the rest he would give away to the tribe to cultivate.

“If [the land owner] doesn’t agree, then we will simply take what is rightfully the Matigsalug’s,” he said.

Even with his newfound authority, Janamjam has not lost sight of his mission. He still teaches at Upian Elementary School. Being both a datu and a teacher has given him a unique understanding of the Matigsalug.

“Maybe, [when the time comes], I’ll move someplace else where I am more needed, but not until I see the lives of the Matigsalug improve,” he said. “Maybe when I see a Matigsalug graduate to become a teacher. Maybe then.”