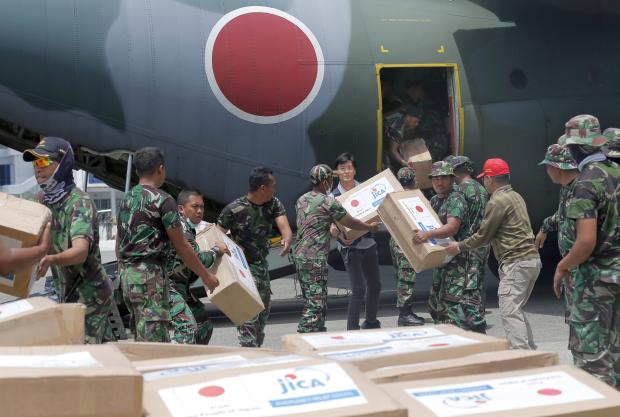 Indonesian and Japanese military personnel unload relief aid from a Japan Air Force cargo plane at the Mutiara Sis Al-Jufri airport in Palu, Central Sulawesi, Indonesia, Saturday, Oct. 6, 2018. A 7.5 magnitude earthquake rocked the city on Sept. 28, triggering a tsunami and mud slides that killed a large number of people and displaced tens of thousands others. (Photo by TATAN SYUFLANA / AP)

PALU, Indonesia — Search teams pulled bodies from obliterated neighborhoods in the disaster-stricken Indonesian city of Palu on Saturday as more aid rolled in and the government said it was considering making devastated areas into mass graves.

Indonesia’s disaster agency said the death toll from the powerful earthquake and tsunami climbed to 1,649, with at least 265 people still missing, though it said that number could be higher. More nations sent aid and humanitarian workers fanned out in the countryside.

The dead were still being recovered more than a week after the double disaster. Eight victims in black body bags of the national search and rescue agency were arranged in a row in the crumpled Palu neighborhood of Balaroa, destined for a mass grave.

Relatives cried as people placed long pieces of white cloth, to represent a Muslim burial rite, inside the bags.

Among them was 39-year-old Rudy Rahman, who said the bodies of his 18- and 16-year-old sons had been found. His youngest son remained missing. He watched as rescue workers unloaded the bags from a truck. His wife wept inconsolably.

“They were found in front of my brother’s house opposite the mosque,” Rahman said. “They found them holding each other. These two brothers were hugging each other.”

Balaroa was one of the areas hardest hit by the Sept. 28 magnitude 7.5 quake, which threw homes in the neighborhood tens of meters and left cars upright or perched on eruptions of concrete and asphalt. Many children were in the area’s mosque at the time of the quake for Quran recitation. An assistant to the Imam had said none survived.

Indonesia’s top security minister, Wiranto, who uses a single name, said the government is mulling the possibility of turning Balaroa and Petobo, another neighborhood in Palu, into mass graves. Petobo disappeared into the earth as the force of the quake liquified its soft soil. Liquefaction also struck a large section of Balaroa.

Wiranto said efforts to retrieve bodies are problematic in those neighborhoods, where homes were sucked into the earth, burying possibly hundreds of victims.

He said it’s not safe for heavy equipment to operate there.

Wiranto also said on local television that the government is discussing with local and religious authorities and victims’ families the possibility of halting the search and turning the areas into mass graves. The victims can be considered “martyrs,” he said.

A Japanese Self Defense Force plane landed at Palu’s airport Saturday morning. Soldiers unloaded tons of supplies, including medicine and small portable generators, in boxes emblazoned with the Japanese flag and the words “From the People of Japan.” Several other nations have also sent planeloads of aid. Video showed the military dropping supplies from helicopters in places and a large Red Cross ship docked at a port in the region.

In the dusty one-road village of Pewunu, excited children shouted “Red Cross! Red Cross!” as one of the aid group’s medical teams arrived and set up a makeshift clinic in a field where evacuees were sleeping under tarps. One villager said they survived by ransacking shops.

Volunteers laid out a big white tarp on a stage in front of the village office, plonked a green desk on it and interviewed people about their needs as dozens milled around.

Doctors performed medical checks on elderly residents who emerged from tents and climbed the stage’s stairs with canes or others supporting them.

People living in the camp said two residents died in collapsing houses in the village. They said they had clean water and noodles but not much else.

“There were supplies, but these were looted. All along the roads toward here, they were looted by outsiders,” said Bahamid Fawzi.

“All this while in this crisis, we don’t have water, we don’t have food,” he said. “After that, we started ransacking the stores and the shops. Not because we’re thieves, but because we really needed it. There’s no water, no food — like it or not, we had to do it.”

The earthquake and tsunami swept away buildings along miles (kilometers) of coastline and knocked out power and communications for several days.

In a rare move, Indonesia’s government has appealed for international help to cope with the tragedy unfolding on Sulawesi island.

The United Nations Office for the Coordination of Humanitarian Affairs says $50.5 million is required to deliver “immediate, life-saving” aid. /atm