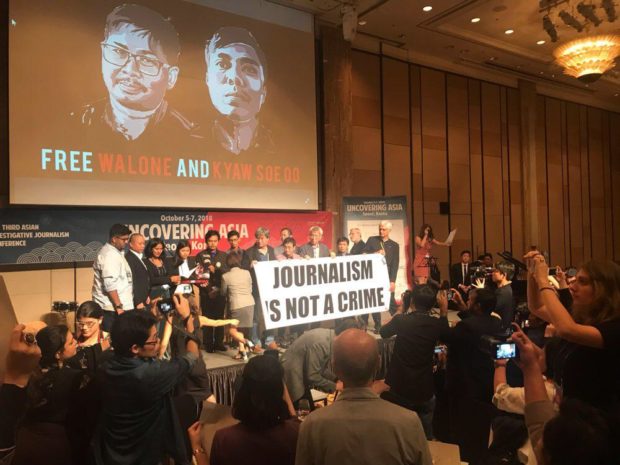 They were arrested in December 2017 while investigating the extrajudicial killings of 10 Rohingya men during a military crackdown in the Rakhine state.

“We call upon the government of Myanmar and Daw Aung San Suu Kyi to immediately and unconditionally release Wa Lone and Kyaw Soe Oo, both unjustly convicted and jailed, simply for doing their crime of exemplary reporting on a matter of great public interest,” conference attendees said in a statement read by Sheila Coronel, academic dean of the Columbia Journalism School, and one of the conference moderators.

The journalists, in the same statement, also demanded that “governments, multilateral agencies and authorities worldwide commit to protecting the press, freeing those held arbitrarily, and ending impunity for those who attack journalists.”

Earlier this week, Suu Kyi, the de facto leader of the former pariah state, was stripped of her honorary Canadian citizenship for refusing to call out the abuses of Myanmar military against the Rohingya Muslim minority. /atm