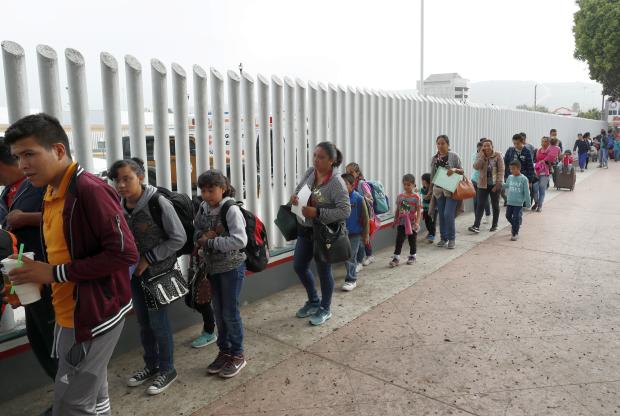 This photo, taken July 26, 2018, shows people lining up to cross into the United States to begin the process of applying for asylum near the San Ysidro port of entry in Tijuana, Mexico. Homeland Security’s watchdog says immigration officials were not prepared to manage the consequences of its “zero tolerance” policy at the border this summer that resulted in separation of nearly 3,000 children from parents. (Photo by GREGORY BULL / AP)

WASHINGTON — Immigration officials were not prepared this summer to manage the consequences of a “zero tolerance” policy at the Southwest border, which resulted in the separation of nearly 3,000 children from their parents, Homeland Security’s watchdog said in a report made public on Tuesday.

The resulting confusion along the border led to misinformation among separated parents who did not know why they had been taken from their children or how to reach them, longer detention for children at border facilities meant for short-term stays, and difficulty in identifying and reuniting families.

And backlogs at ports of entry may have pushed some into illegally crossing the U.S-Mexico border, the report found.

While the Trump administration had been widely criticized for the policy, the criticism previously came mostly from political opponents and not from independent, nonpolitical investigators.

Investigators with Homeland Security’s Office of the Inspector General compiled the report after speaking with about 50 immigration employees, plus 17 detainees and parents who had been separated from their children and later released. They also reviewed documents and data. Homeland Security is the umbrella department for U.S. Customs and Border Protection and Immigration and Customs Enforcement.

Homeland Security officials say the report illustrates how difficult it is to enforce broken and poorly written immigration laws. The inspector general, they said, wrongly mixed up what happens to migrants caught crossing illegally between borders with migrants who come to legal ports of entry seeking asylum.

“This administration will no longer turn a blind eye to illegal immigration and will continue to refer illegal border crossers for prosecution. We are committed to enforcing the rule of law and ensuring that there are consequences for illegal actions,” Homeland Security spokeswoman Katie Waldman said.

Illegally crossing the U.S. border had already been a criminal charge, but authorities had previously avoided large-scale family separation. But the Trump administration has made curbing immigration a major focus, working to harden what administration officials say are lax laws.

In May, officials began criminally prosecuting anyone caught crossing the border illegally. Children were separated from their parents as the adults went through criminal proceedings.

The move prompted international outrage and President Donald Trump eventually signed an executive order stopping the separations. A lawsuit was filed by the American Civil Liberties Union on behalf of parents, and a judge ordered the families reunited. That process is ongoing, though the government has said it has reunited all eligible parents with children.

“Thousands of children are living with trauma because of the Trump administration’s family separation fiasco,” said Lee Gelernt, lead lawyer on the ACLU case. “Some parents may never see their children again. This report shows not just the cruelty of the Trump administration’s actions, but also its ineptitude and historic failure of foresight in comprehending the devastating effects and fallout from this policy.”

Children are only supposed to be held for 72 hours before being transferred to the custody of officials with Health and Human Services, which manages the care of migrant children and must adhere to strict policies governing their welfare. But, at least one child was held for 25 days in a Border Patrol facility.

During the weeklong period of fieldwork by the inspector general’s office, the average time children spent in a Border Patrol facility was 65 hours — but one child remained for 12 days. The delay meant Border Patrol officers couldn’t focus on their work.

“Instead of patrolling and securing the border, officers had to supervise and take care of children,” the report said.

Immigration officials also struggled to identify, track and reunify families because agency systems were not properly integrated, according to the report. Three different agencies were involved: U.S. Customs and Border Protection officials police the borders and ports where migrants come. Adults are turned over to Immigration and Customs Enforcement where their asylum claims are reviewed, and children must be turned over to U.S. Health and Human Services.

Border Patrol agents also didn’t ensure that children who were too young or otherwise unable to talk could be correctly identified with a wrist bracelet or other identifier. Most children weren’t photographed — any easy way to link them with parents.

Some parents were not properly advised of what was happening, and lacked access to communicate with their children, the report found, though some facilities worked to change that.

At the same time zero tolerance was being enforced, Border Protection saw a rise in asylum seekers coming to ports of entry, filling holding facilities to capacity.

As a result, some officers told asylum seekers to go back and wait for space to open up, and that may have pushed some families to cross illegally, the report found.

Democrats said the report was damning.

“The report confirms that the Administration outright misled Congress and the American people for months about its cruel family separation policy,” Rep. Bennie Thompson of Mississippi said.

A separate inspector general report on the conditions at border patrol facilities found that despite some being unclean, detainees had proper access to food, bathrooms and clean bedding. The report found no issues with temperatures inside the facilities, though migrants often complain of freezing temperatures. /atm