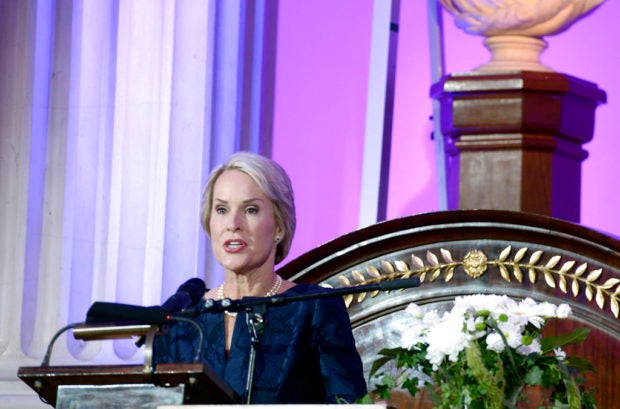 In this May 24, 2016 file photo, US biochemical engineer Frances Arnold, speaks after winning the Millennium Technology Prize 2016 during the awards ceremony in Helsinki, Finland. AP

STOCKHOLM —  Scientists have been applauding the winners of the Nobel chemistry prize, saying that that it highlights the practical role chemistry plays in our daily lives.

Carol Robinson, president of Britain’s Royal Society of Chemistry, says the prize shows how chemistry contributes “to many areas of our lives including pharmaceuticals, detergents, green catalysis and biofuels.”

Douglas Kell, a professor of bioanalytical science at the University of Manchester, says the prize is “fantastic news. Really well deserved. Nobels commonly go to folk who develop methods that revolutionize practice or understanding.

These methods are entirely general and have done both.”

Nobel chemistry laureate George Smith, reached at his home in Columbia, Missouri, was quick to credit the work of others in his prize.

“Pretty much every Nobel laureate understands that what he’s getting the prize for is built on many precedents, a great number of ideas and research that he is exploiting because he is at the right place at the right time,” he told The Associated Press.

“Very few research breakthroughs are novel. Virtually all of them build on what went on before. It’s happenstance. That was certainly the case with my work. Mine was an idea in a line of research that built very naturally on the lines of research that went before.”

Smith said he learned of the prize in a pre-dawn phone call from Stockholm. “It’s a standard joke that someone with a Swedish accent calls and says you won! But there was so much static on the line, I knew it wasn’t any of my friends,” he said.

He said he has “no idea” what he’ll do with the prize money. “We’re going to give it away, I think. But we’ll think hard how we’ll do it. It’s not just the money, it has a meaning well beyond the money.”

Smith, 77, was a professor for 40 years at the University of Missouri at the Division of Biological Sciences. /ee