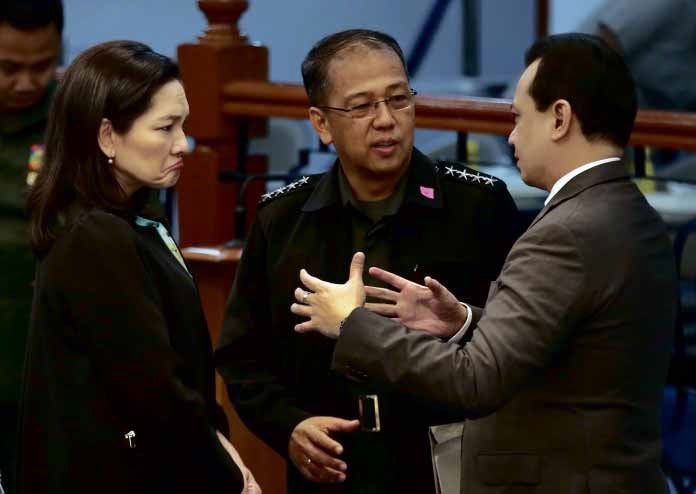 AMNESTY ROW Gen. Carlito Galvez Jr., the military chief of staff, talks with Senators Antonio Trillanes IVand Risa Hontiveros after a Senate hearing on the defense budget on Tuesday. He testified that Trillanes applied for amnesty in 2011 but that he suspected there had been “lapses” in the handling of amnesty documents that led to the loss of the former military rebel’s papers. —LYN RILLON

Did Sen. Antonio Trillanes IV, as a military rebel seven years ago, apply for amnesty or not?

Gen. Carlito Galvez Jr., chief of staff of the Armed Forces of the Philippines, thinks so.

Malacañang, however, doesn’t care what Galvez, who is not a lawyer, says.

The best proof that Trillanes applied for amnesty is his application form, according to presidential spokesperson Harry Roque.

The application form cannot be found in the files of the Department of National Defense (DND) and the AFP deputy chief of staff for personnel, or J1.

Trillanes grilled military officials during a hearing on the DND budget for 2019 on Tuesday, asking them if, based on their investigation, he indeed filed for amnesty in 2011.

He noted that he was given an amnesty certification.

Answering Trillanes’ questions, Galvez deferred to Col. Josefa Berbigal, who had submitted an affidavit stating that the former Navy junior officer applied for amnesty and admitted his guilt, contradicting President Rodrigo Duterte’s claim that he failed to apply for amnesty and admit guilt in attempts to overthrow the government in 2003, 2006 and 2007.

The President cited the absence of an application form as basis for his Proclamation No. 572 voiding Trillanes’ amnesty, ordering his arrest, and giving instructions for the revival of the rebellion and coup d’état cases against him that were dismissed by the courts in 2011.

Galvez said he suspected that there were “lapses” in the handling of the amnesty documents, that these were not forwarded to J1.

This was why Lt. Col. Thea Joan Andrade from J1 issued a certification that “there is no available copy of [Trillanes’] application for amnesty in the records,” Galvez said.

He said that according to Berbigal, who headed the secretariat that processed in January 2011 amnesty applications resulting from Proclamation No. 75 of then President Benigno Aquino III, the amnesty process “was administered at the GHQ [General Headquarters].”

Trillanes pressed Galvez to say if he applied for amnesty or not.

Galvez replied: “According to her,” referring to Berbigal.

The military chief also said there were apparently some “lapses” in the handling of documents related to the amnesty.

“Our suspicion is that the repository of the documents did not bring these down to us at GHQ,” he said.

Trillanes said he was satisfied with Galvez’s answers.

“It does not matter. He (Galvez) is not a lawyer,” Roque said in Malacañang when told by reporters about the military chief’s testimony in the Senate.

“I’m talking as a lawyer, best evidence rule. And besides, that’s in the courts and one court has said that the pictures and everything else that Senator Trillanes adduced are not enough and, of course, I concur as a lawyer. Certainly you don’t expect me to take the side of Chief Galvez who was not a lawyer over the words of a learned judge,” Roque said.

He said Galvez’s testimony would not help Trillanes’ case because the court had already decided, referring to the decision of Judge Elmo Alameda of the Makati Regional Trial Court Branch 150 to reopen the rebellion case against the senator.

At the budget hearing in the Senate, Defense Secretary Delfin Lorenzana spoke about the involvement of Solicitor General Jose Calida in the amnesty row.

Lorenzana said Calida called him up on Aug. 16 asking if he could help produce the “amnesty records” of Trillanes and several others.

Lorenzana said he told Calida to have his staff coordinate with his office.

They found a copy of Proclamation 75 and the amnesty document signed by former Defense Secretary Voltaire Gazmin, he said.

Calida, he said, later wrote to GHQ to get other records, and a member of the J1 staff certified that Trillanes’ application form for amnesty could not be found.

Lorenzana said the DND had started to investigate the loss of Trillanes’ amnesty application form and had invited members of the committee that handled the 2011 amnesty grant to shed light on the matter.