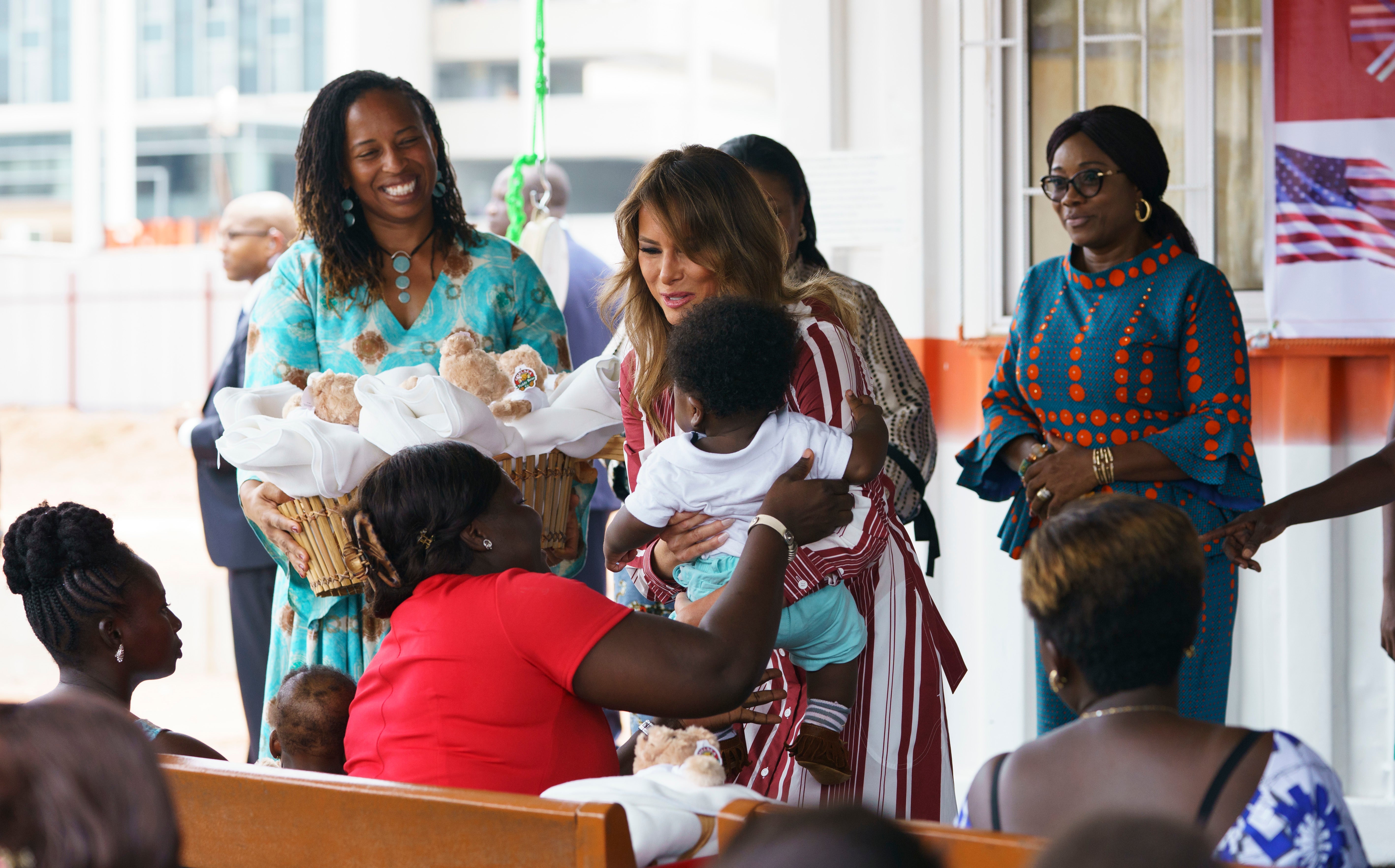 ACCRA, Ghana — Melania Trump opened her first big solo international trip as U.S. first lady on Tuesday with a wave, a smile and a baby in her arms, aiming to promote child welfare during a five-day tour of Africa.

She arrived in the West African nation of Ghana after an overnight flight from Washington and quickly made her way to the Greater Accra Regional Hospital.

The first lady saw how babies are weighed — they’re placed in sacks that are then hung from a hook attached to a scale. She also watched a nurse demonstrate how vitamins are administered to babies by mouth and toured the neonatal intensive care unit.

Mrs. Trump also cradled an infant and declared the baby a “beautiful boy” as she handed him back to his mother.

Mothers at the hospital for her visit received gifts of teddy bears nestled in white baby blankets, personally handed out by the first lady. The items carried the logo of “Be Best,” the child well-being initiative Mrs. Trump launched last May.

With the Africa visit, the first lady aims to take “Be Best” and its focus on opioid abuse and online behavior to an international audience.

The first lady also had a private tea with her Ghanaian counterpart, Rebecca Akufo-Addo. They exchanged gifts: a Chippendale silver tray embossed with an image of the White House inside a leather case signed by “First Lady Melania Trump” for Akufo-Addo, and Kente cloth and artifacts for Mrs. Trump, according to her spokeswoman, Stephanie Grisham.

The first ladies met privately for about a half-hour at Jubilee House, Ghana’s presidential palace. The two first met last week in New York at a reception on the sidelines of the U.N. General Assembly, where Mrs. Trump spoke about her upcoming trip.

“Did you say President Trump’s wife just arrived in Accra?” street vendor Awo Yeboah asked. “I don’t think I have ever heard her name, Melania.”

Other locals said they knew about the visit but didn’t know what Mrs. Trump was doing.

Mrs. Trump landed in the capital, Accra, on Tuesday morning after a more than 12-hour journey from Washington. She was welcomed at the airport with dancing and drumming, schoolchildren waving mini U.S. and Ghanaian flags and the gift of a flower bouquet. Akufo-Addo was at the airport to welcome her.

President Donald Trump told reporters on the South Lawn of the White House on Tuesday that he saw television footage of her landing in Africa.

“It was beautiful,” he said. “She’s really doing a great job as first lady.”

The president later tweeted: “Proud of our great First Lady – and she loves doing this!”