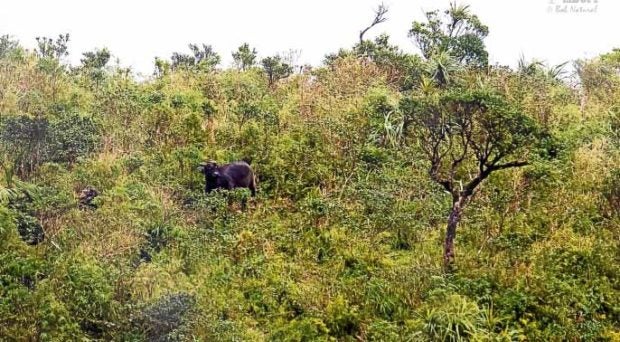 SIGHTED A NEW The elusive tamaraw, one of the country’s critically endangered animal species, is sighted anew by a research team on Mt. Gimparay in Oriental Mindoro. —PHOTO COURTESY OF BOB NATURAL OF MBCFI

CITY OF CALAPAN — After decades of not being sighted in this part of Oriental Mindoro province, up to 30 tamaraws (Bubalus mindorensis), a critically endangered animal species, are grazing again on Mt. Gimparay in Naujan town, according to conservationists.

“We have seen five individual tamaraws. Three were seen on the north of Mt. Gimparay and two in the south,” said Don Geoff Tabaranza, wildlife biologist and research program manager of the Mindoro Biodiversity Conservation Foundation Inc. (MBCFI).

The last published record of tamaraw sighting in the province was in Catuiran River in 1887 or 131 years ago, he noted.

Tabaranza was part of a research team that embarked on an expedition from Aug. 27 to Sept. 8. The team included the provincial environment officer of Oriental Mindoro, municipal environment officers of Socorro and Naujan, and members of the Naujan Lake National Park-Protected Area, MBCFI, D’Aboville Foundation and the Sigod Katangona Datiyan Kanyam Deya Samahan.

Signs of the tamaraws

Eduardo Bata, a senior ranger at the Department of Environment and Natural Resources (DENR)-Tamaraw Conservation Program based in San Jose town in Occidental Mindoro, led the 12-day mission.

The team saw signs of the animal and the tamaraws themselves, Tabaranza said.

According to the DENR website, the tamaraw population was estimated to be 10,000 in the early 1900s but because of a rinderpest outbreak in the 1930s, the figure declined drastically.

The biggest number was recorded at the Mt. Iglit-Baco National Park in Occidental Mindoro. The 2018 annual tamaraw count held there in April recorded 523.

Seventy other tamaraws were found at the Upper Amnay Watershed in Sablayan, while others were reported to be on Mt. Aruyan, Mt. Bongabong, Mt. Calavite and Mt. Halcon.

The tamaraw is one of the Philippines’ most endangered species and is endemic to Mindoro. It is also among the proposed national symbols.

It is about a meter tall, its tail shorter than that of the carabao (water buffalo) and its horns V-shaped, in contrast with the carabao’s flaring horns.

Its hair is thicker and darker than the carabao’s.

Tabaranza presented to stakeholders at Tamaraw Hall in the provincial capitol photos of physical evidence and of tamaraw sightings on Mt. Gimparay.

The expedition team also came upon wallows, hoof marks and fresh feces of the magnificent animal. These were from the habitats, which consisted of creeping bamboo thickets, upper montane/mossy forest and tropical subalpine forest.

“It took us three days’ trek before reaching the pristine and remote site,” Tabaranza said.

The stakeholders, particularly the local government, are taking seriously the protection of the area from human traffic.

People may be able to cross there if the provincial road from Sablayan in Occidental Mindoro connecting to Victoria in Oriental Mindoro opens.

The fact that the Mt. Gimparay area is part of the ancestral domain in Oriental Mindoro is also being seriously considered.

During a forum to present the results of the expedition on Sept. 18, the participants agreed that a four-day seminar-workshop for the local governments and communities would be held to map out the protection of the tamaraws’ habitat.

Presidential Proclamation No. 273 of 2002 declares October of every year a special month for the Conservation and Protection of the Tamaraw in Mindoro.

These include the ride for a cause or a bike trail; a five-day camp at the Gene Pool Farm in Rizal town, Occidental Mindoro province; Biodiversity Conservation Camp at Mt. Iglit-Baco National Park; forums on the tamaraw; opening of the Tams’ World Exhibit in Tagaytay City’s Far Eastern University (FEU); a biodiversity quiz, and poster making.

FEU, which has the tamaraw as its symbol, also has a monthlong “Ultimate Tamaraw Challenge.”