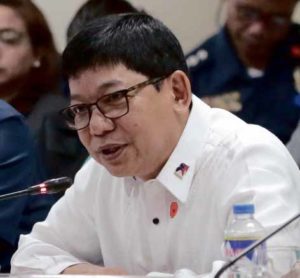 Top security officials are seeking amendments to the 11-year-old antiterrorism law, which they consider the “weakest” in Southeast Asia, to allow for longer detention of suspects without charges and technical surveillance period.

The officials want law enforcers to have the power to detain terrorism suspects for 30 days, instead of just three days, and to conduct wiretapping and monitoring of online activity for 90 days or even longer with court permission.

Speaking at a Senate hearing, they said the current Human Security Act was too stringent and restricted law enforcers from going after terrorists.

Laws in other countries, they pointed out, allow terror suspects to be held anywhere from a week to indefinitely, depending on need.

Director General Alex Monteagudo of the National Intelligence Coordinating Agency said the Philippines had the “weakest” antiterrorism law in Southeast Asia despite being the most affected by the problem.

“It is now one of the reasons we are attracting foreign terrorist fighters from other countries from as far as Syria, Iraq, Morocco and all others because we have a very weak Human Security Act,” Monteagudo said.

ML on back burner

Defense Secretary Delfin Lorenzana said a stronger law would put the need for a martial law declaration on the back burner.

Recalling his exchange with a lawmaker who asked if extending martial law in Mindanao was necessary, Lorenzana said this should be the government’s last option because what was needed was a better law to fight terrorism.

“We will not use martial law if we have something that could give teeth to the security agencies,” he said.

Sen. Panfilo Lacson, who cochaired the hearing as head of the public order and dangerous drugs panel, said the Human Security Act was a dead letter—a law that had become ineffectual.

Lacson said no person or organization had been prosecuted under the law. Its first and only implementation, he noted, was the proscription of the Abu Sayyaf group as a terrorist organization by a Basilan court.

“As lawmakers, we cannot in good conscience remain silent and do nothing about our primary law against terrorism, becoming nothing more than a useless piece of legislation,” he said.

“We cannot have it buried in our archives instead of being a source of strength of our law enforcers to prevent, respond to and address the growing threat of terrorism.”

Galvez said the “very, very permissive” antiterror law led authorities to set free the suspects in bombings in Isulan, Sultan Kudarat province. Authorities could not detain them based on mere suspicion, he said.

“The law does not really help the security forces to really do their job,” Galvez said.

Authorities needed a longer time to interrogate suspects, he said, adding an ideologue bomber would take two or three weeks to break for him to provide substantial information to his captors.

Albayalde said the country should not wait for a repeat of the five-month siege of Marawi City by Islamic State-allied forces before strengthening the Human Security Act.

Esperon lamented that the provision in the antiterror law that would make law enforcers pay P500,000 a day for any mistake they would commit in arresting and detaining a suspect was also hampering their efforts.

Lacson said this was among the provisions to be amended, pointing out that it was leading law enforcers to file charges other than violation of the antiterror law to avoid being prosecuted or made to pay for damages should the suspect be acquitted.

The committee is considering letting the court decide whether to award damages for wrongful arrest or prosecution under the law, he said.

The senator also sought to ease fears about an extended detention period without charges.

He said this did not mean that anybody could just be picked up. The rules for warrantless arrest would still apply, meaning the person to be detained must be about to commit, was actually committing, or had just committed a terrorism-related act.

The Anti-Terrorism Council (ATC) would serve as a safeguard from possible abuse of the extended wiretapping period because its authorization is needed before law enforcers could conduct technical surveillance, Lacson said.

“If there is no sufficient ground or no prior intelligence information pointing to that individual as a suspected terrorist, the ATC would not approve it,” he added.