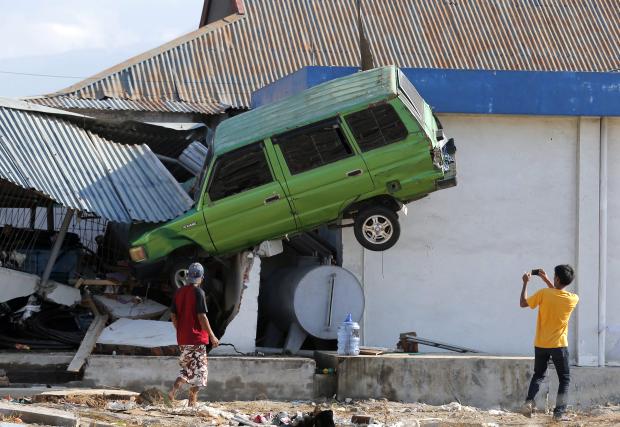 A man takes a photo of a car lifted into the air with his mobile phone following a massive earthquake and tsunami at Talise beach in Palu, Central Sulawesi, Indonesia, Monday, Oct. 1, 2018. A mass burial of earthquake and tsunami victims was being prepared in a hard-hit city Monday as the need for heavy equipment to dig for survivors of the disaster that struck a central Indonesian island three days ago grows desperate. (Photo by TATAN SYUFLANA / AP)

PALU, Indonesia — As officials began burying hundreds of dead in a mass grave Monday, thousands of survivors of a devastating earthquake and tsunami converged on the airport of this heavily damaged Indonesian city and clamored to leave, saying there was little to eat and their homes were unsafe.

The confirmed death toll of 844, mostly from the city of Palu, is expected to rise as authorities reach areas that were cut off by the disaster. The magnitude 7.5 earthquake struck at dusk Friday and generated a tsunami said to have been as high as 6 meters (20 feet) in places.

Search-and-rescue teams combed destroyed homes and buildings, including a collapsed eight-story hotel, for any trapped survivors, but they needed more heavy equipment to clear the rubble.

Many people were believed trapped under shattered houses in Palu’s Balaroa neighborhood, where the earthquake caused the ground to heave up and down violently, said disaster agency spokesman Sutopo Purwo Nugroho.

In the city’s Petobo section, the quake caused loose, wet soil to liquefy, creating a thick, heavy mud that caused massive damage. “In Petobo, it is estimated that there are still hundreds of victims buried in mud,” Nugroho said.

Residents who found loved ones — alive and dead — over the weekend expressed frustration that it took rescue teams until Monday to reach Petobo.

Desperation was evident across Palu, a city of more than 380,000 people on the island of Sulawesi.

About 3,000 residents flocked to its airport, trying to board military aircraft or one of the few commercial flights, local TV reported. Video showed some of them screaming in anger because they were not able to get on a departing military plane.

“We have not eaten for three days!” one woman yelled. “We just want to be safe!”

Nearly 50,000 people have been displaced from their homes in Palu alone, Nugroho said, and hospitals were overwhelmed.

The Indonesian air force confirmed that a Hercules aircraft carrying an unspecified number of survivors was able to leave Palu for South Sulawesi’s capital of Makassar.

Indonesian President Joko “Jokowi” Widodo authorized the acceptance of international help, Nugroho said, adding that generators, heavy equipment and tents were among the most-needed items. The European Union and 10 countries have offered assistance, including the United States, Australia and China, he said.

“We will send food today, as much as possible with several aircraft,” Widodo told reporters in the capital, Jakarta, adding that a supply of fuel was also set to arrive.

Hundreds of people were lined up for fuel at gas stations across Palu, with waiting cars snarling traffic amid neighborhoods with fences painted with the red and white colors of the Indonesian flag.

Groups of children, some smiling but others with anxious expressions, stood in the middle of roads holding boxes for cash donations. Signs were displayed along roads, saying “We need Food” and “We need support.” Another asked about the whereabouts of their local political leader.

Three days after the powerful waves struck, the coastline at Palu remained strewn with rubble and a few brightly colored cargo containers poking out of the water. Those buildings that still stood near the water were ruined shells.

A heavily damaged mosque was half submerged, and a shopping mall was reduced to a crumpled hulk. A large bridge with yellow arches collapsed.

The city is built around a narrow bay that apparently magnified the force of the tsunami as the waves raced into the tight inlet. Nugroho said water was reported as high as 6 meters (20 feet) in places.

Indonesian TV showed a conscious Nusin talking to his rescuers from the National Search and Rescue Agency, known as Basarnas, as they worked by flashlight. He was carried away on a stretcher, although his condition was not known.

Elsewhere in Palu, Edi Setiawan said he and fellow residents rescued five children and four adults, including a pregnant woman. His sister and father, however, did not survive.

“My sister was found embracing her father,” he said. “My mother was able to survive after struggling against the mud and being rescued by villagers.”

On Sunday night, a 25-year-old woman was rescued Sunday evening at the toppled Roa-Roa Hotel, according to the National Search and Rescue Agency, which released photos of her on a stretcher.

Novry Wullur of Indonesia’s search and rescue agency said Nurul Istiharah, 15, managed to survive after being trapped inside her house after it collapsed. Her mother and niece were dead next to her, and she was submerged in water up to her neck and was in danger of drowning before her legs were finally freed. She was being treated for hypothermia.

The official death toll of 844 was released by Nugroho on Monday, an increase of only 12 from the previous day, with nearly all from Palu. The regencies of Donggala, Sigi and Parigi Moutong — with a combined population of 1.2 million — had yet to be fully assessed.

Officials dug a trench 10 meters by 100 meters (33 feet by 330 feet) in Palu and began laying the dead in brightly colored body bags side by side.

Local army commander Tiopan Aritonang said 545 bodies would be brought to the grave from one hospital alone.

“This must be done as soon as possible for health and religious reasons,” he said. Indonesia is majority Muslim, and religious custom calls for burials soon after death, typically within one day.

Local military spokesman Mohammad Thorir said the area adjacent to a public cemetery can hold 1,000 bodies. All of the victims, coming from hospitals, have been photographed to help families locate where their relatives were buried.

Video showed residents walking from body bag to body bag, opening the tops to check if they could identify faces.

Around midday, teams of workers, their mouths covered by masks, carried 18 bodies to the trench as a backhoe waited to push soil on top of the dead. More burials were expected to follow.

Nugroho said 114 foreigners were in Palu and Donggala during the disaster. All were accounted for except one Belgian, one South Korean and six French.
It was the latest natural disaster to hit Indonesia, which is frequently struck by earthquakes, volcanic eruptions and tsunamis because of its location on the “Ring of Fire,” an arc of volcanoes and fault lines in the Pacific Basin.

In December 2004, a massive magnitude 9.1 earthquake off Sumatra island in western Indonesia triggered a tsunami that killed 230,000 people in a dozen countries. More recently, a powerful quake on the island of Lombok killed 505 people in August.

Indonesia is a vast archipelago of more than 17,000 islands home to 260 million people. Roads and infrastructure are poor in many areas, making access difficult in the best of conditions. /atm