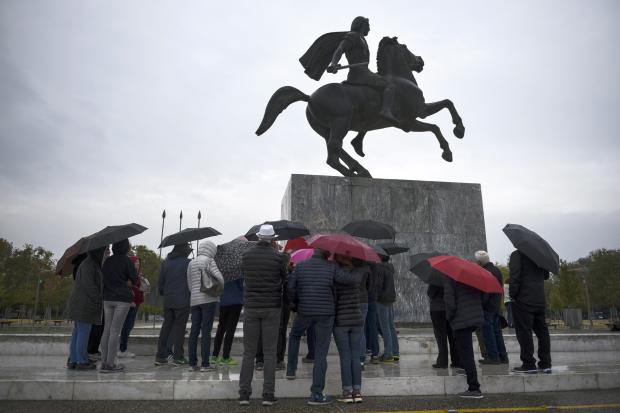 Tourists visit a statue of Alexander the Great, at the northern Greek city of Thessaloniki on Sunday, Sept. 30, 2018. Macedonians were deciding Sunday on their country’s future, voting in a referendum on whether to accept a landmark deal ending a decades-old dispute with neighboring Greece by changing their country’s name to North Macedonia, paving the way to NATO membership. (Photo by GIANNIS PAPANIKOS / AP)

SKOPJE, Macedonia — Macedonians were deciding on their country’s future Sunday, voting whether to accept a landmark deal ending a decades-long dispute with neighboring Greece by changing their country’s name to North Macedonia.

The June deal would pave the way for NATO and possibly European Union membership, ending a dispute dating from the early 1990s when Macedonia declared independence from Yugoslavia.

Greece had argued that name implied territorial ambitions on its own province of the same name, and blocked the country’s efforts to join NATO.

But the agreement has faced vocal opposition on both sides of the border.

Opponents in Macedonia have called for a boycott of Sunday’s referendum and include the country’s president, Gjorge Ivanov, who calls the deal a “flagrant violation of sovereignty.”

Voters were confronted with the question: “Are you in favor of membership in NATO and European Union by accepting the deal between (the) Republic of Macedonia and Republic of Greece?”

The referendum is non-binding, allowing the government to take the outcome as a fair reflection of public opinion regardless of the turnout. Under the country’s constitution, a binding referendum would need a minimum turnout of 50 percent.

Supporters of the deal, led by Prime Minister Zoran Zaev, have focused on the vote being the lynchpin of the country’s future prosperity, the key to its ability to join NATO and, eventually, the EU.

It would be a major step for a country that less than two decades ago almost descended into civil war, when parts of its ethnic Albanian minority took up arms against the government, seeking greater rights.

Zaev cast his ballot in the southeastern town of Strumica and called on his fellow citizens to ensure a strong turnout.

“I invite everyone to come out and make this serious decision for the future of our country, for future generations,” Zaev said. “I expect a massive vote, a huge turnout to confirm the multiethnic nature of this country and the political unity of this country, no matter which party they are coming from.”

If the “Yes” vote wins, the next step is for the government to amend parts of the country’s constitution to ensure it doesn’t contain anything that could be considered irredentist against Greece.

Only after those changes are approved by the Macedonian parliament does the deal face ratification in Greece.

Djose Tanevski was among the early voters in Skopje, the capital.

“I came here because of the future of our children, who should have a decent life, a life in a lovely country, which will become a member of the European Union and NATO,” he said.

But others said they had no intention of voting.

“I’m disappointed with all that is happening with Macedonia,” said 34-year-old Bojan Krstevski. “I cannot give up my Macedonian identity. I don’t want to be North Macedonian.”

The referendum has stirred strong interest in the West, with German Chancellor Angela Merkel and U.S. Defense Secretary Jim Mattis among top foreign officials heading to Skopje recently to urge its people to vote “Yes.”

There’s been growing concern over the reach of Russia, which is not keen on NATO expanding in a part of Europe once under its sphere of influence. Mattis said there was “no doubt” that Moscow had funded groups inside Macedonia to campaign against the name change.

Even if Macedonians vote in favor of the deal, the agreement still faces several hurdles before it can be fully ratified.

The constitutional amendments that are required need a two-thirds majority of parliament’s 120 members to go through. So far Zaev has pledges of support from 73 lawmakers — seven short. A low turnout on Sunday could complicate his task in persuading more lawmakers that the name change deal reflects the will of the people.

Once the hurdle of constitutional amendments is overcome, Greece must then ratify the deal.

But Greek Prime Minister Alexis Tsipras faces problems of his own. His governing coalition partner, right-wing Independent Greeks head Panos Kammenos, has vowed to vote against the deal in parliament, leaving Tsipras reliant on opposition parties and independent lawmakers to push the deal through. /atm