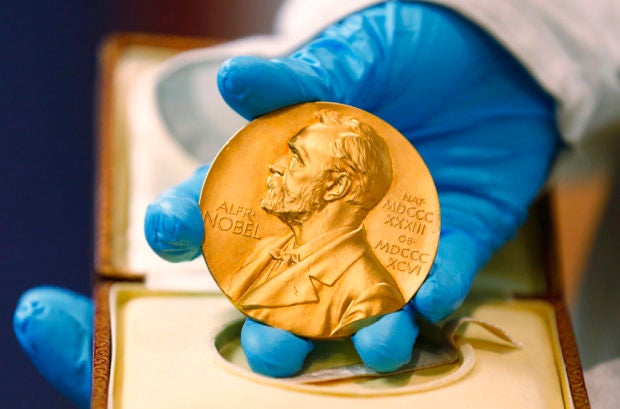 STAVANGER, Norway  — Nobel Prizes are the most prestigious awards on the planet but the aura of this year’s announcements has been dulled by questions over why so few women have entered the pantheon, particularly in the sciences.

The march of Nobel announcements begins Monday with the physiology/medicine prize.

Since the first prizes were awarded in 1901, 892 individuals have received one, but just 48 of them have been women.

Thirty of those women won either the literature or peace prize, highlighting the wide gender gap in the laureates for physics, chemistry and physiology/medicine. In addition, only one woman has won for the economics prize, which is not technically a Nobel but is associated with the prizes.

Some of the disparity likely can be attributed to underlying structural reasons, such as the low representation of women in high-level science. The American Institute of Physics, for example, says in 2014, only 10 percent of full physics professorships were held by women.

But critics suggest that gender bias pervades the process of nominations, which come largely from tenured professors.

“The problem is the whole nomination process, you have these tenured professors who feel like they are untouchable.

They can get away with everything from sexual harassment to micro-aggressions like assuming the woman in the room will take the notes, or be leaving soon to have babies,” said Anne-Marie Imafidon, the head of Stemettes, a British group that encourages girls and young women to pursue careers in science, technology, engineering and mathematics.

“It’s little wonder that these people aren’t putting women forward for nominations. We need to be better at telling the stories of the women in science who are doing good things and actually getting recognition,” she said.

Powerful men taking credit for the ideas and elbow grease of their female colleagues was turned on its head in 1903 when Pierre Curie made it clear he would not accept the physics prize unless his wife and fellow researcher Marie Curie was jointly honored. She was the first female winner of any Nobel prize, but only one other woman has won the physics prize since then.

More than 70 years later, Jocelyn Bell, a post-graduate student at Cambridge, was overlooked for the physics prize despite her crucial contribution to the discovery of pulsars. Her supervisor, Antony Hewish, took all of the Nobel credit.

Brian Keating, a physics professor at the University of California San Diego and author of the book “Losing the Nobel Prize: A Story of Cosmology, Ambition, and the Perils of Science’s Highest Honor,” says the Nobel Foundation should lift its restrictions on re-awarding for a breakthrough if an individual has been overlooked. He also says posthumous awards also should be considered and there should be no restriction on the number of individuals who can share a prize. Today the limit is three people for one prize.

“These measures would go a long way to addressing the injustice that so few of the brilliant women who have contributed so much to science through the years have been overlooked,” he said.

Keating fears that simply accepting the disparity as structural will seriously harm the prestige of all the Nobel prizes.
“I think with the Hollywood #MeToo movement, it has already happened in the film prizes. It has happened with the literature prize. There is no fundamental law of nature that the Nobel science prizes will continue to be seen as the highest accolade,” he said.

This year’s absence of a Nobel Literature prize, which has been won by 14 women, puts an even sharper focus on the gender gap in science prizes.

The Swedish Academy, which awards the literature prize, said it would not pick a winner this year after sex abuse allegations and financial crimes scandals rocked the secretive panel, sharply dividing its 18 members, who are appointed for life. Seven members quit or distanced themselves from academy. Its permanent secretary, Anders Olsson, said the academy wanted “to commit time to recovering public confidence.”

The academy plans to award both the 2018 prize and the 2019 prize next year — but even that is not guaranteed. The head of the Nobel Foundation, Lars Heikensten, was quoted Friday as warning that if the Swedish Academy does not resolve its tarnished image another group could be chosen to select the literature prize every year.

Stung by criticism about the diversity gap between former prize winners, the Nobel Foundation has asked that the science awarding panels for 2019 ask nominators to consider their own biases in the thousands of letters they send to solicit Nobel nominations.

“I am eager to see more nominations for women so they can be considered,” said Goran Hansson, secretary-general of the Royal Swedish Academy of Sciences and vice chairman of the Nobel Foundation. “We have written to nominators asking them to make sure they do not miss women or people of other ethnicities or nationalities in their nominations.

It’s not the first time that Nobel officials have sought diversity. In his 1895 will, prize founder Alfred Nobel wrote: “It is my express wish that in the awarding of the prizes no consideration shall be given to national affiliations of any kind, so that the most worthy shall receive the prize, whether he be Scandinavian or not.”

Even so, the prizes remained overwhelmingly white and male for most of their existence.

For the first 70 years, the peace prize skewed heavily toward Western white men, with just two of the 59 prizes awarded to individuals or institutions based outside Europe or North America. Only three of the winners in that period were female.

The 1973 peace prize shared by North Vietnam’s Le Duc Tho and American Henry Kissinger widened the horizons — since then more than half the Nobel Peace prizes have gone to African or Asian individuals or institutions.
Since 2000, six women have won the peace prize.

After the medicine prize on Monday, the Royal Swedish Academy of Sciences will announce the Nobel in physics on Tuesday and in chemistry on Wednesday, while the Nobel Peace Prize will be awarded Friday by the Norwegian Nobel Committee. On Oct. 8, Sweden’s Central Bank announces the winner of the economics prize, given in honor of Alfred Nobel. /ee