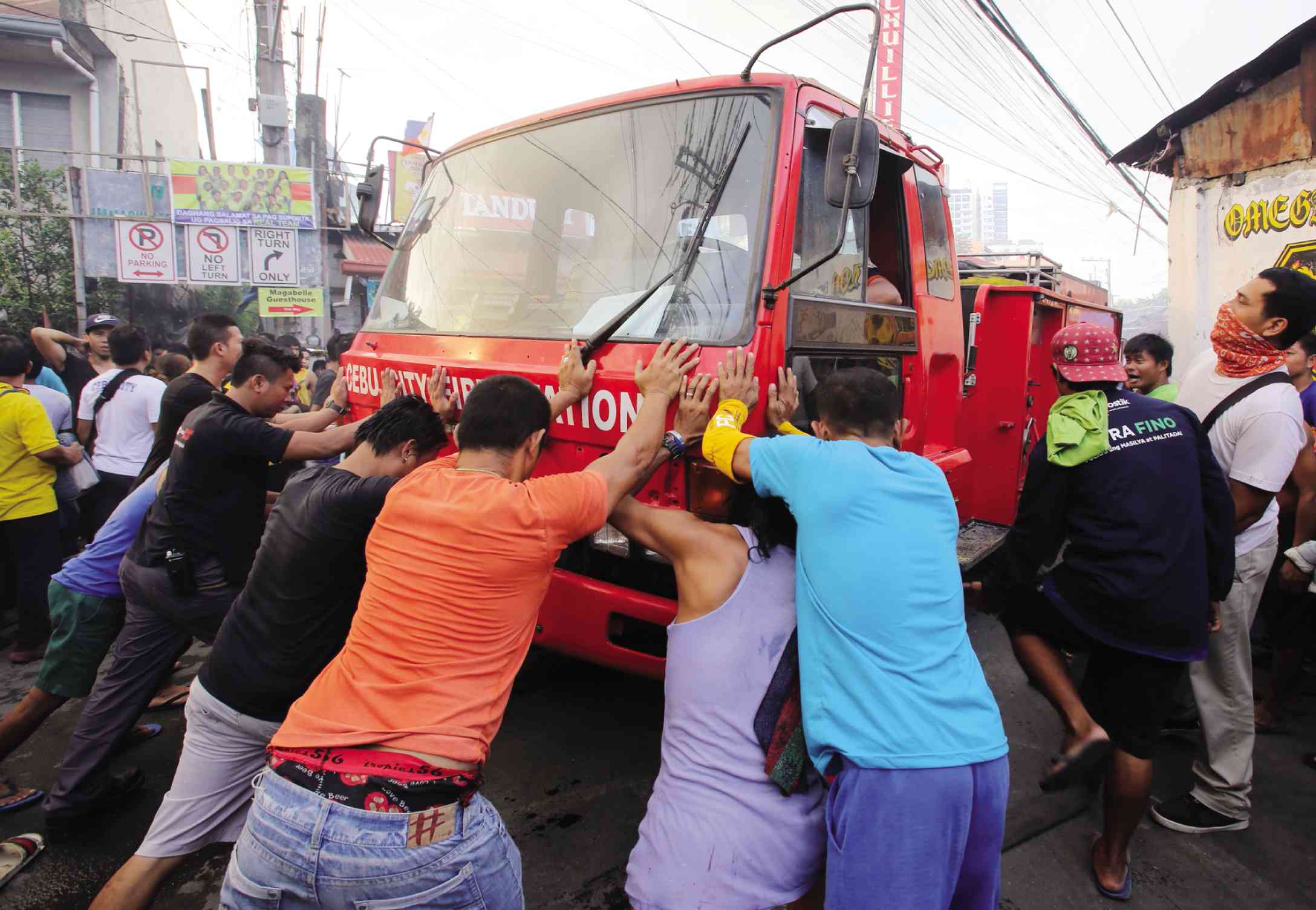 HELPING HANDS Residents of Hipodromo village in Cebu City, push a fire truck after its engine conked out at the height of the fire in the area. —JUNJIE MENDOZA/CEBU DAILY NEWS

The family and relatives of confessed drug lord Rolando “Kerwin” Espinosa Jr. lost their homes to a fire that engulfed a community called Cahipa in the village of Hipodromo, Cebu City, past 3 p.m. on Thursday.

Except for a few clothes, Kerwin’s aunt, Emma Espinosa, said her family was unable to save belongings.

“We didn’t expect this to happen,” she said.

Kerwin, who was born and raised in Cebu City before his family moved to Albuera town in Southern Leyte, is currently behind bars pending resolution of the drug charges filed against him in court.

The Espinosas lost four homes in Hipodromo, including an ancestral house estimated to be 20 years old.

Emma said the family was nonetheless grateful that no one was hurt.

At least 193 families, residing in 115 houses, were displaced by the fire, said Renante Vanguardia of the Department of Social Welfare and Services in Cebu City.

The Hipodromo Barangay Council was to declare a state of calamity in the village.

The fire spread quickly in the neighborhood reaching the highest alert level.

Chief Insp. Noel Nelson Ababon, Cebu City fire marshal, said the fire was believed to have started from the two-story house of a certain Ramie Inopiquez.

Damage was estimated at P2 million.

Fire victims were allowed to stay at Hipodromo Sports Complex.

“At the moment, what we can give is dinner for everyone,” said acting Mayor Edgardo Labella, who assumed the city’s top post in the absence of Mayor Tomas Osmeña, who is on an official trip to Taiwan.

Hipodromo barangay captain Rupinto Bacolod, whose house was also devoured by the blaze, appealed to people for help as residents try to rebuild homes and start anew.

Although the cause of the fire has yet to be known, Ababon said electrical misuse, faulty electrical wiring and unattended open flames were among the top causes of fire in previous years.