Feisty Miriam missed: What would she say amid this circus? 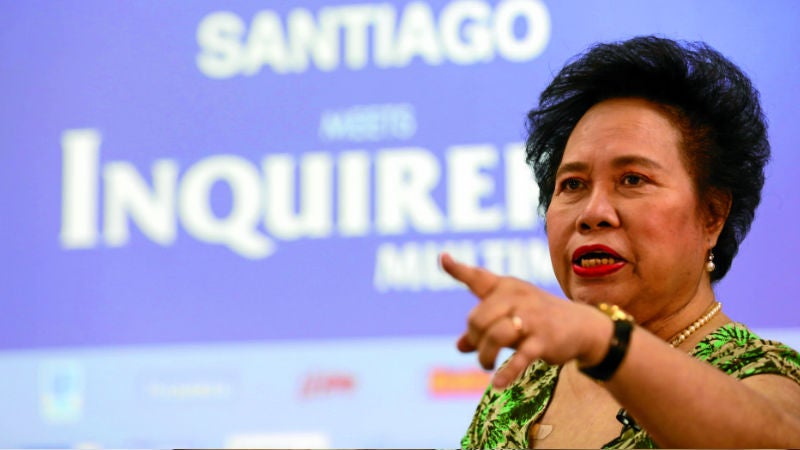 On the second death anniversary of Sen. Miriam Defensor Santiago on Saturday, friends and supporters never felt her absence as strongly as now as they wondered what she would do and say about the many controversies in the Senate and in the national scene.

“I miss her as a friend and I miss her for what she could be doing for our country in these challenging times,” said former Health Secretary Esperanza Cabral, a close friend and personal doctor of the late senator.

Cabral said many people had told her or posted on social media how they miss Santiago’s presence in the political scene.

“Many of us think she could be playing a vital role in reminding Filipinos of our shared destiny; in heeding our nobler angels and steering the nation toward a better future,” Cabral told the Inquirer.

Santiago, a three-term senator and two-time presidential aspirant, died on Sept. 29 last year, two years after being diagnosed with late-stage lung cancer. She was 71.

Three years before the diagnosis, Santiago made history by being the first Asian to be elected judge on the International Criminal Court. She later declined the post on account of her medical condition.

‘Even internet misses her’

Her supporters and longtime youth volunteers said they were sorely missing her voice and her stand against corruption and incompetence and her championing of the rule of law.

Tom Tolibas, Santiago’s former media relations officer in the Senate, said many people had approached him to say that “no new Miriam” had emerged in the Senate.

“Even the internet misses her: almost every time I browse Facebook there’s somebody posting a relevant quote from her, or using her image to personify the mix of wit, wisdom and righteous indignation Filipinos have been missing in their political life since September 2016,” Tolibas said.

People miss the “outspoken, lyrically highfalutin and essential” Santiago, he stressed. “For every controversy in the past 12 months and thereafter, there is a nagging whisper at the back of people’s minds saying, ‘What would Miriam say?’ We miss the times that there is an answer to that question.”

Vincent Jerome Agustin, one of Santiago’s youth volunteers in the 2016 presidential election, said what he missed most was Santiago’s “bravery and intellect” and her standing up no matter who was sitting in Malacañang.

EJ Clamor, another youth volunteer, said what was admirable about Santiago was her “expert and unbiased stand on burning issues without regard for political affiliations.”

“Philippine politics is undoubtedly not the same without Miriam. If she were still here, she would not allow the Senate to lose its dignity and credibility. She won’t let this circus happen. I truly miss the fearless, witty Miriam in Senate hearings,” Clamor said.

“With all the unfortunate things happening to our country, specifically the way some government officials circumvent the law for their own benefit, Miriam Defensor Santiago is terribly missed not only by her supporters, but also by people who care about the law,” said Raymond Fernandez, another volunteer in the 2016 election.

In December 2017, President Duterte nominated Santiago to posthumously receive the Quezon Service Cross, the country’s highest civilian award, for her distinguished life of service to her country.

The Senate and the House of Representatives approved the nomination through a concurrent resolution. However, the conferment of the award is still pending in Malacañang.

“Right now, the disposition of the Filipino continues to be broken and dispirited due to corruption in government … (T)his act of the President may serve as a motivation for Filipinos to work excellently and honestly even if others will not, (and) inspire the public to follow in the footsteps of the late senator,” the group said in a statement.

To mark Santiago’s second death anniversary, family, friends and supporters will gather for a Mass at Loyola Memorial Park in Marikina City at 9 a.m. today.