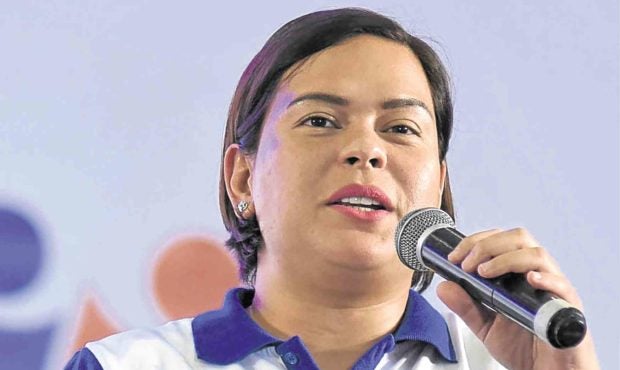 During Wednesday’s Judicial and Bar Council (JBC) interview with aspirants to fill the spot vacated by the early retirement of now Ombudsman Samuel Martires, Marquez was asked about the issue by members Atty. Milagros Fernan-Cayosa and retired Judge Toribio Ilao.

Duterte earlier issued a statement that a Supreme Court aspirant is trying to curry her favor by asking complainants and witnesses to withdraw the disbarment case filed against her for punching a sheriff during a demolition in 2011.

Cayosa asked Marquez on his association with a a lady from Davao who allegedly interceded on his behalf.

“Did you know that [she] will go to Davao to approach the mayor purportedly for your benefit,” Cayosa asked.

Marquez said he has a lot of well-meaning friends and acquaintances who offered to help him.

“I cannot tell all these well-meaning friends that no, I do not need your help…I would just say thank you without me knowing what they are going to do and without me knowing the extent that they will be doing whatever,” Marquez said.

He said he believed that his qualifications will take him the high court seat.

“My credentials, my track record that for me, these qualifications will stand on their own merit,” Marquez said.

Marquez also denied using his influence to convince complainant and witnesses to withdraw the disbarment case against the young Duterte.

“I am not aware what information has reached the good Mayor but it seems and as borne by her affidavit, it appears that I spoke to the sheriff and convinced them to file a motion to withdraw the disbarment case they filed in 2011,” Marquez said.

“For the record, Your Honor, I only met these sheriffs on this particular issue early this month, early September 2018. After I received a copy of the affidavit. I requested again the sheriffs to come just to clarify what exactly happened,” he added.

“So, what did I do? According to them, and that is borne by their joint affidavit which I submitted to this body, they got in touch with this sheriff in Davao, hoping to have an audience with the good Mayor. I did not have anything to do with this, I did not know that all this time, this was happening. But, that meeting did not materialize. Why? I do not know. So, fast forward to September 2018, early this month, that was the only time I saw them.

“They were just asking if they could do it [withdraw the disbarment complaint]. And so, I said, it’s up to you, but I told them that withdrawal of a disbarment case is not controlling on the Court. But, just the same, if you want to do it, it’s up to you…I was only told later on that it was already filed before the Office of the Bar Confidant,” he added. /je