Men wanted for killing and torturing kangaroos in Australia 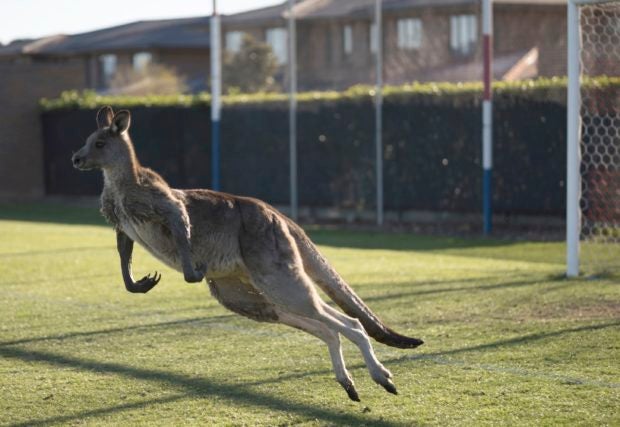 In this June 24, 2018, photo, a kangaroo interrupts the Women’s Premier League between Belconnen United and Canberra FC match in Canberra for over 30 minutes. (Lawrence Atkin/Capital Football via AP)

SYDNEY – Three men accused of torturing and killing kangaroos are being hunted by police in Australia, just days after a man was arrested for intentionally mowing down emus in another high-profile animal cruelty case.

Police in Western Australia on Wednesday released images of the men wanted for questioning over separate incidents in June and May during which “two kangaroos were tortured and killed”.

A man was seen brandishing knuckle-dusters in one of the pictures, alongside another suspect with his face pixelated and wearing a similar weapon on his hand.

The hunt for the alleged kangaroo killers comes on the heels of an arrest made after sickening footage of a driver running over emus in the outback sparked a social media storm.

The video, described as “horrific cruelty” by animal welfare groups, showed a man ploughing into at least a dozen of the ostrich-like birds in his four-wheel drive, counting and laughing loudly each time he hit one.

A 20-year-old man was arrested in Victoria late Friday over the incident and was expected to face a raft of charges related to animal cruelty. /kga