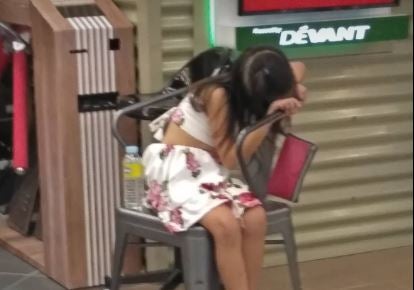 One 5-year-old girl was left alone by her adult companions outside the cinemas of SM City Pampanga while they watched the horror movie “The Nun”. The young girl was seen by Nelson Mendoza, a cinema checker, last Sept. 16, Sunday.

Mendoza told INQUIRER.net last Sept. 20 that he was delegated to check on the ticket rates of an assigned film that Sunday. He was doing his usual work routine when he reached the cinemas in the afternoon. He then overheard the porters around him talking about a babysitter and, when he looked around, saw the young girl sitting by herself.

Mendoza first thought the girl was the niece of one of the porters, but he was told that she was not. He was also told that four adults (three female, one male) came to watch “The Nun” and, when not allowed to bring the girl inside, left her out to wait.

“The Nun” was given an R-13 rating by the Movie and Television Review and Classification Board (MTRCB); this means only viewers who are 13 years old and above can be admitted.

He also told INQUIRER.net that he tried to talk to the girl because she looked “so bored.”

([I asked her,] “Aren’t you hungry? Do you want popcorn?” She said she does not want to leave her spot because her mother might not find her later. I feel sorry for the child, 5 years old. To keep her seated there, you do not know if she feels like going to the bathroom, or if she is hungry, it is like punishment. For me, after what happened, Sunday and Monday night, I could not sleep.)

Mendoza added that the cinema supervisor was also there, doing the rounds. “Nakita niya yung bata. And I talked to her, ‘Kawawa naman yung bata.'” (I feel sorry for the child.)

The cinema supervisor shared the same sentiments, but, as per Mendoza, was not able to do anything. Meanwhile, he shared that he could not call the companions from inside the cinema, since he is not an employee of the cinema and he has no authority whatsoever.

He also took a picture of the girl, who looked tired as she rested her head on the chair. He shared it on Facebook on Sept. 17; the post has since garnered almost 70,000 shares and 170,000 reactions.

“As simple as it may look, to parents leaving your child out and unsupervised is negligence and abusive,” he wrote on his post. “To the cinema’s management, you are very strict about bringing in shawarma, pizza, pasta and canned drinks, you ought to be stricter in accepting ‘valuables’ too.” 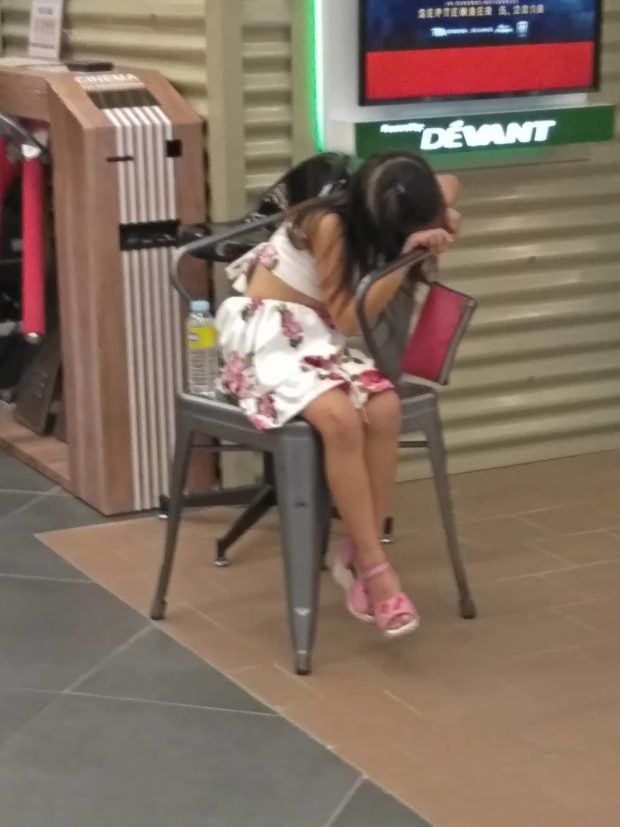 Despite his post making the rounds, Mendoza was compelled to change the privacy setting of it, which used to be a public post. He shared that he was pressured by the mall to take down his post, adding that the cinema supervisor also messaged him, asking why he had to post about it on Facebook.

“Sabi ko (I said), that is child endangerment, that’s even punishable under Family Code. It’s just like child abuse. Sure there were porters and guards, but still they are complete strangers to the young girl,” he said in defense. “All I want is awareness. It’s as simple as that. I think this is relevant.”

Mendoza also shared that the Department of Social Welfare and Development has since contacted him regarding the child and told him they will conduct an investigation.

“The safety of our patrons and their families are our first priority,” the statement read. “Our personnel are trained to ensure that this policy is upheld at all times.”

“As part of our standard protocol and as a continuous reminder to our guests, SM Cinema adheres to the MTRCB movie guidelines and advise parents and guardians with minor children to watch movies for General Patronage. We at SM Cinema, are always dedicated in giving our patrons the best movie viewing experience.” JB