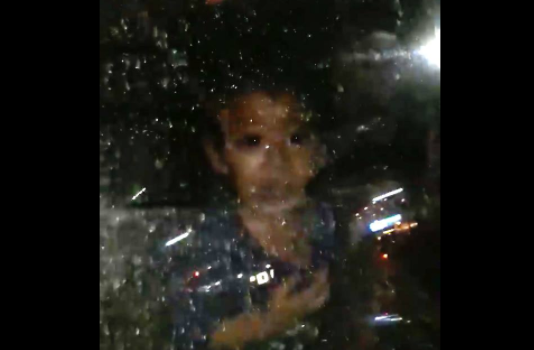 Much of social media was up in arms when a 2-year-old kid was found alone inside a Toyota Fortuner in the parking lot of Metrowalk in Pasig, a commercial hub known for its bars, restaurants and live bands.

The 2-year-old was discovered by a concerned citizen Jasper Pascual who was coming home from Metrowalk last night. Pascual took a video of the incident and shared it on his Facebook account, which quickly went viral.

In the video, the crying toddler can be seen peering outside the car’s window. Pascual, meanwhile, can be heard cussing loudly and repeatedly over the toddler’s situation.

(A worthless parent left a baby inside the car in the parking lot. I’m about to go home from Metrowalk and I was parked beside this Toyota Fortuner when I noticed that it looks like a child is crying.)

Pascual shared that the car was heavily tinted so he couldn’t see if the toddler was with anybody inside. But when Pascual was about to get inside his own car, which was parked beside the Toyota Fortuner, the toddler started hitting the car window with his hands and his cries got even louder.

(I was surprised because the child had no company. The kid was suffocating. The car is also not started, so there’s no aircon. Imagine! In the darkness of the parking area of Metrowalk, would you think there’s a baby inside a car with no companion?)

Pacual then called the security guard to help look for the parents of the toddler.

(After five minutes I was able to ask a guard to look for the parents. And the [mother] even scolded the guard, asking why they had to be called. Kudos to the guard who stood his ground and said, “No ma’am, you’re really in the wrong, we can have you apprehended because this is a child you left right there.”)

According to Pascual, it took 10 more minutes for the father of the child to arrive. Pascual then left the matter to the guard as he didn’t want any fight to start out. He also refrained from sharing the pictures of the toddler’s parents and decided to hide their identity, but not without a plea and warning to other parents.

Thousands of people shared Pascual’s sentiments, with his video amassing over 6.5 million views, 190,000 likes and around 200,000 shares in less than 24 hours, as of this writing.

It is unknown if any charges would be filed against the toddler’s parents. JB