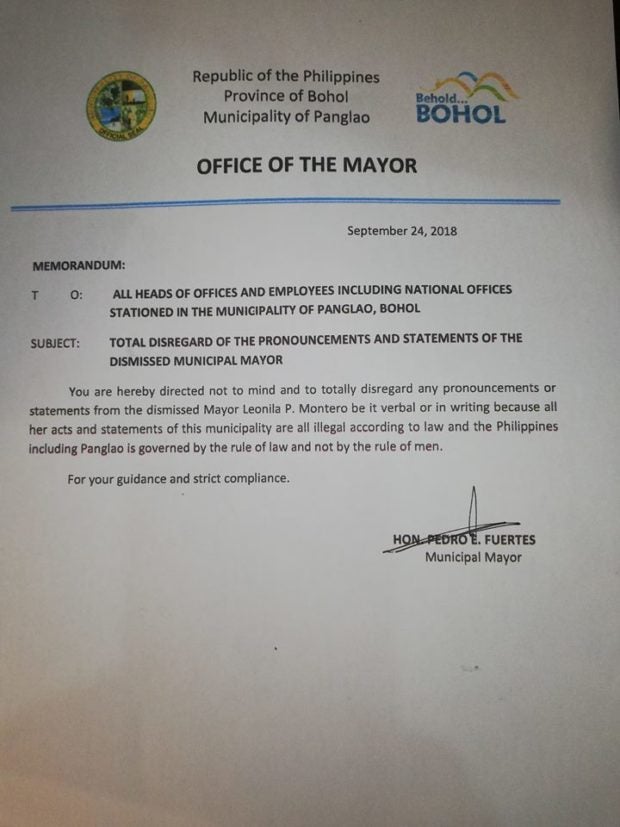 Fuertes issued a memorandum on Sept. 24 ordering his department heads of office and employees including national offices stationed in Panglao to totally disregard the pronouncements and statements of Mayor Leonila Montero. LEO UDTOHAN

PANGLAO, Bohol — The mayors’ troubles here are far from over.

Despite the order from the Department of the Interior and Local Government (DILG) recognizing Pedro Fuertes as the legitimate mayor of Panglao town, embattled Mayor Leonila Montero defied the department’s memorandum and still carried on her duties on Monday.

Montero and Fuertes both attended Monday’s flag raising ceremony and gave speeches before the municipal employees.

While the government workers were walking to their offices after the ceremony, Montero again took the microphone and warned them that they will “be dealt with accordingly” for their failure to follow the law.

Montero explained she can’t honor the DILG decision ordering her to leave office as it was based on opinion and not valid. “It was done hastily, arbitrarily and very unlawfully,” she said.

Fuertes, however, said that it’s only the law that could make him leave the mayor’s office. “The DILG knows who follows the law,” he said. “Your full-fledged mayor has followed the law. If we follow the law, mahapsay unta ang atong pagpangalagad.”

Montero then called Vice Mayor Briccio Velasco and councilors for a meeting. Fuertes said this move was illegal.

“She just brings confusion because she doesn’t follow a simple order from DILG,” he said.

The municipal employees, according to Fuertes, had received their salaries, which had been delayed due to the confusion. Fuertes, who signed the payroll, said his signature was honored by the Commission on Audit (COA).

Last Friday, Fuertes attended an event in Manila organized by League of Municipalities of the Philippines (LMP).

However, on Sept. 10, Montero reassumed her duties as mayor following the decision of the appellate court, invoking Section 46 of the Local Government Code.

The Sangguniang Bayan (SB) also approved a resolution acknowledging her reassumption into office and reinstating her as a signatory to the bank accounts of the LGU.

Montero was not at the office when the DILG personnel arrived, but her municipal administrator Alejandro Arbotante was there.

Mende said the directive would end the confusion and end a standoff and avert any possible violence at the town hall. He said Fuertes would stay as mayor.

“We cannot have two mayors. Mayor Pedro Fuertes is still recognized as mayor,” Mende said.
In the five-page decision, the DILG said Montero’s move to reassume office was premature.

“Per record and report, this Office was informed that respondent Mayor Montero re-assumed office as Mayor of Panglao, Bohol on Sept. 10, 2018 and continues to discharge her functions. Thus, such re-assumtpion to office is premature,” the DILG stated in its directive.

“Accordingly, respondent Montero should continue serving the penalty of dismissal with all its accessory penalties imposed in Ombudsman’s Joint Order dated 19 Jan. 2018 relative to OMB-V -A -15-2084, unless directed otherwise by a competent court,” it added.

Montero insisted that the Court of Appeals has reinstated her, but Fuertes, who assumed the mayorship after Montero’s dismissal by the Ombudsman, is not stepping down until further order by the court and the DILG.

Fuertes holds office at the second floor, while Montero occupies her original office on the ground floor.

Montero was dismissed for three months last Oct. 24, 2017 by then Ombudsman Conchita Carpio after she was found guilty of simple misconduct for appointing four defeated candidates less than a year after losing in the elections.

The Office of the Ombudsman said Montero hired the four as consultants in July 2013, just two months after they lost in the May polls, without executing any contract of service or issuance of any appointment paper duly reviewed and approved by the town council.

There is a one-year prohibition on the appointment of a losing candidates in an election. But even before completing the three-month suspension, the anti-graft office upgraded the charge to grave misconduct and ordered Montero’sdismissal from service on Jan. 19, 2018.

Montero sought relief from the Court of Appeals which later issued an order on June 28 affirming her three-month suspension and setting aside her dismissal from service.

Since she had served her suspension, Montero said she could already resume her functions as mayor.
Montero’s petition for review of the Ombudsman’s decision is pending at the CA’s Special 12th Division. /ee