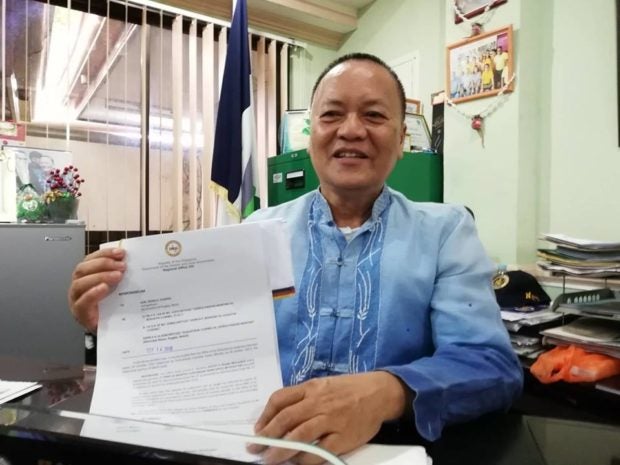 PANGLAO, Bohol – Who is the rightful mayor of Panglao, the crown jewel of Bohol’s tourism? The Department of Interior and Local Government (DILG) said it’s Pedro Fuertes.

On Monday, seven hours after Fuertes and Leonila Montero – who both claimed being the legitimate mayor of the town – attended the municipality’s flag raising ceremony, the DILG put to rest the nine-day standoff and recognized Fuertes as the lawful local chief executive of Panglao.

However, Montero was not at her office when DILG personnel arrived. It was her municipal administrator Alejandro Arbotante who faced the personnel. The order was served at 3:30 p.m.

According to Mende, the directive would end the confusion as to who was the mayor, as well as conclude the impasse and avert any possible violence at the town hall.

In the five-page decision, the DILG said Montero’s move was premature.

“Per record and report, this Office was informed that respondent Mayor Montero re-assumed office as Mayor of Panglao, Bohol on Sept. 10, 2018 and continues to discharge her functions. Thus, such re-assumption to office is premature,” the DILG order and directive stated.

“Accordingly, respondent Montero should continue serving the penalty of dismissal with all its accessory penalties imposed in Ombudsman Joint Order dated 19 Jan. 2018 relative to OMB-V -A -15-2084, unless directed otherwise by a competent court,” it added.

“I am still the full-fledged mayor of Panglao,” Fuentes told Inquirer.

Tension was felt during Monday’s flag raising ceremony at the municipal hall as Fuertes and Montero attended the event.

Both even gave their speeches before the employees.

Montero told employees that her comeback was based on facts.

“The fact is I am the duly reelected mayor of Panglao,” she said. “I have already served my legal predicaments.”

She said the DILG’s decision was based on opinion and a not a valid law.

On the other hand, Fuertes just told employees that he would wait for the DILG order.

“I am just waiting for the DILG for whatever decision,” Fuertes said during the flag-raising ceremony.

It was only in Panglao town where two mayors, two municipal administrators, and one municipal vice mayor took office in one town hall.

Employees have not received their salary last September 15 because of the confusion. /kga