EXPLAINER: Why blogger Drew Olivar can’t be arrested yet for bomb scare 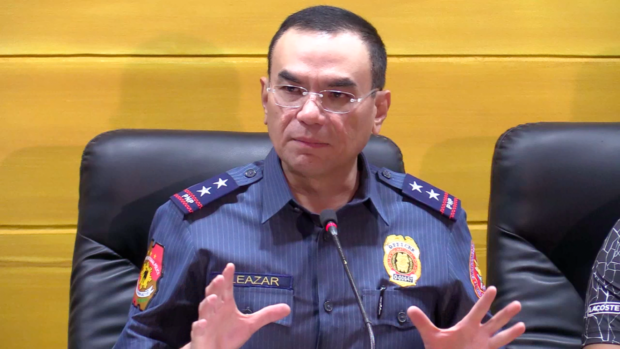 Director Guillermo Eleazar, chief of the National Capital Region Police Office (NCRPO), clarified on Monday why blogger Drew Olivar could not yet be arrested over his “bomb scare” post on Facebook.

He said Olivar’s case was different from that of a Navy trainee who in April 2016 was immediately nabbed for cracking a bomb joke at a station of the Metro Rail Transit Line 3.

In his post last Thursday, Sept. 20, Olivar noted that a bombing similar to what happened in Plaza Miranda — on Aug. 21, 1971 — could happen on Edsa on Sept. 21, as protesters were set to stage rallies to commemorate the 46th anniversary of the declaration of martial law by President Ferdinand Marcos.

On Saturday, he was accompanied by Assistant Secretary Mocha Uson of the Presidential Communications Operations Office, his friend, to the NCRPO headquarters in Camp Bagong Diwa in Taguig to explain his side.

Eleazar also hosted a press conference with the two bloggers present, but Olivar was not arrested.

Olivar apologized, but only to those who were alarmed by his post or who misunderstood what he said.

He said he wasn’t joking since there were indeed bomb threats for Friday’s rallies.

In 2016, however, James Thomas de la Cruz, an apprentice seaman of the Philippine Navy, was immediately arrested by authorities after making a bomb joke at the GMA Kamuning Station of MRT 3 despite begging on his knees and in tears not to be arrested.

“Ako lang ‘yung may trabaho sa pamilya at pinag-aaral ko ‘yung dalawang kapatid ko,” he was reported as saying then.

[I’m the bread winner in the family and I send my two siblings to school.]

But Eleazar said the case of De la Cruz was different from that of Olivar.

“He was arrested while committing a crime,” Eleazar said in a statement.

According to Eleazar, Olivar was not arrested during the press conference since his bomb scare did not fall within the circumstances of warrantless arrest under the Section 5 of Rule 113 of the Revised Rules of Criminal Procedure.

Eleazar said Olivar’s offense had already “consummated” before he attended the press conference and that the meeting happened after the supposed occurence of the bomb threat.

“Thus, the incident does not fall under Section 5 of Rule 113 which allows the arrest of Olivar without a valid warrant,” Eleazar said.

Dir. Gen. Oscar Albayalde, chief of the Philippine National Police, later made an assurance that Olivar would face charges in violation of Presidential Decree 1727, which forbids cracking any bomb jokes or spreading false or malicious information on bombings. /atm