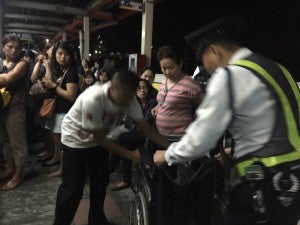 MANILA — A member of the Philippine Navy underwent inquest on Wednesday for cracking a bomb joke at the Metro Rail Train Line 3 Kamuning Station in Quezon City.

James Thomas dela Cruz, 22, apprentice seaman of the Armed Forces of the Philippines and resident of Zamboanga City, was taken into custody on Tuesday 2:40 p.m., police said.

Security guard Rosemarie Mengo said she heard Dela Cruz jokingly say that there was a bomb in the bag of his female companion.

To prevent danger, Mengo informed the head guard and checked the bags of Dela Cruz and his companion. No explosives were found.

Dela Cruz is facing a case of violation of Presidential Decree No. 1727 also known as the anti-bomb joke law.

Convicted violators face five years in jail or fine of P40,000, or both depending on the court’s ruling.  SFM