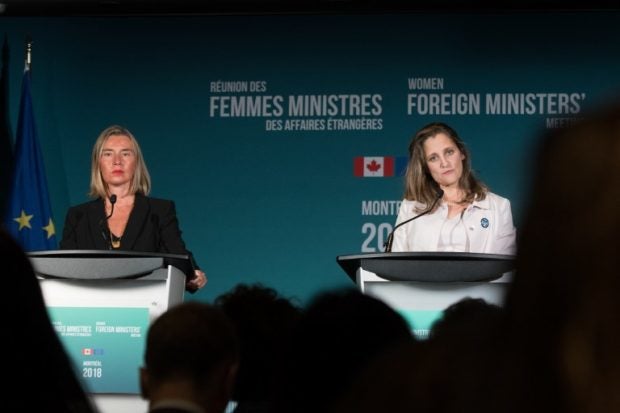 The two-day meeting bringing together more than half of the world’s top women diplomats in Montreal, which began Friday, focused on topics such as conflict prevention, democratic growth and eliminating gender-based violence.

“This is not about creating a pink ghetto. This is quite to the contrary. This is about highlighting the importance and the role and the rights of women and girls in the world.

“It’s about talking about the ways women in leadership positions can be particularly engaged in championing those rights.”

The ministers will share their takeaways from the talks during meetings taking place as part of the United Nations General Assembly in New York next week.

The diplomatic chiefs from 17 countries promised to meet regularly — albeit informally — within the next year.

“We planted a seed that will grow into I believe a plant with beautiful flowers,” said European Union diplomatic chief Federica Mogherini, who co-led the meeting with Freeland.

At the end of the summit, a dozen of the participants symbolically placed flowers on headstones erected in a Montreal park to commemorate 14 women killed in 1989 at the Ecole Polytechnique engineering school.

The killer, who targeted women in what was classified as a hate crime, wounded 14 others.

ADVERTISEMENT
Read Next
One year on, far right has transformed German politics
EDITORS' PICK
LGUs must issue fare matrix to allow tricycles to operate — DILG
Cherry Mobile teams up with Cloud Panda PH, launches online store
COOCAA TV Bounce Back Sale offers up to 50% off
Employers may monitor staff in work-from-home setup — NPC
Smart launches new LTE-Advanced Pocket WiFi Plans starting at P699 per month
Philippines’ COVID-19 cases surge to 20,626, deaths near 1,000-mark
MOST READ
Lacson to Duque: ‘Just go’
‘Ang Probinsyano,’ other ABS-CBN programs to return as new channel set to emerge
Philippines’ COVID-19 cases surge to 20,626, deaths near 1,000-mark
Duterte lambasts Trillanes anew: ‘You did nothing but glorify yourself’
Don't miss out on the latest news and information.