One year on, far right has transformed German politics 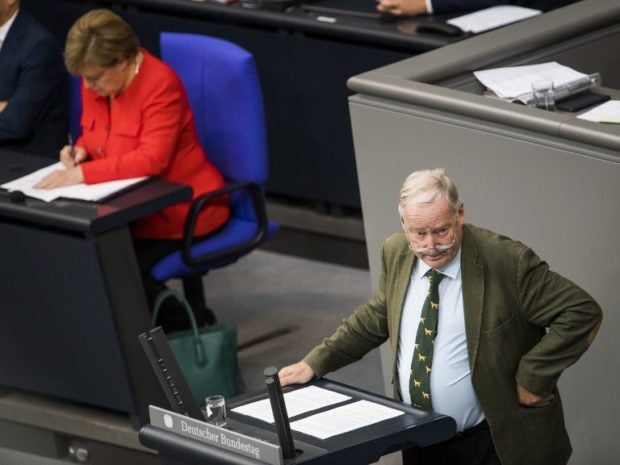 Co-leader of the parliamentary group of the Alternative for Germany (AfD) far-right party Alexander Gauland delivers a speech during a sitting of the Bundestag, Germany’s lower house of parliament in Berlin on September 12, 2018. At left is Chancellor Angela Merkel. / AFP PHOTO / Odd ANDERSEN

BERLIN, Germany – A year after surging into parliament, lawmakers from the far-right AfD party have upended the normally staid world of German politics, with provocations and insults now the order of the day in the venerable Bundestag.

Taking up 92 seats in the lower house of parliament, the country’s largest opposition party uses every chance it gets to rail against immigration, Islam and especially Chancellor Angela Merkel.

The combative rhetoric, some of it unthinkable until a few years ago, has at times stunned seasoned lawmakers. But the tactic appears to be paying off.

Recent surveys suggest the AfD would garner 18 percent of votes if elections were held now, second only to Merkel’s center-right CDU, itself weakened by the rise of the far right.

“The parliamentary culture is now more confrontational,” said Paul Nolte, a history professor at the Free University of Berlin.

In what the Frankfurter Allgemeine daily called “a historic turning point”, the AfD took 12.6 percent of votes in last year’s September 24 elections to win its first seats in the national parliament.

Not bad for a party that started out as an anti-euro outfit just four years earlier, before capitalizing on anger over Merkel’s 2015 decision to open the borders at the height of Europe’s migrant crisis.

The AfD’s success caused a political earthquake in Germany, where no far-right party had had a large-scale presence in the Bundestag since the end of World War II.

Since then, the once consensus-driven mood in the glass-domed Bundestag has given way to fierce debates peppered with taunts and calls to order.

“They have changed the daily discourse, including in the Bundestag, with words like ‘knife migrants’, ‘asylum flood’ and ‘asylum tourism’,” Greens MP Renate Kuenast told the Frankfurter Allgemeine.

The growing public acceptance of such language and the far-right taboos that are being smashed are “a bigger and more fundamental change than the changes brought by Germany’s reunification”, she added.

In June, an AfD lawmaker caused outrage by using his allocated debate time to call for a minute’s silence for 14-year-old Susanna Feldmann who was raped and murdered, allegedly by a failed Iraqi asylum seeker in a case that fueled anti-migrant sentiment in Germany.

Other MPs accused the AfD of shamelessly politicizing the death, while Bundestag president Wolfgang Schaeuble rebuked the lawmaker for not following procedure.

Rounding on its critics, AfD MP Gottfried Curio recently described the party as the victim of “hatred and being hunted” by other parties.

The words deliberately echoed Merkel’s condemnation of last month’s far-right protests in Chemnitz, where she said foreigners were “hunted down” during protests triggered by the fatal stabbing of a German man, allegedly by asylum seekers.

When Social Democratic MP Johannes Kahrs called the presence of right-wing radicals in the Bundestag “unappetizing”, the AfD’s entire parliamentary faction walked out in protest.

The SPD’s Martin Schulz, a former European Parliament chief, dialed up the heat even more in a scathing takedown of the AfD this month in which he told the far-right party’s co-leader Alexander Gauland he belonged “on the dungheap of history”.

The remark referenced Gauland’s controversial description of the Nazi period as a mere “speck of bird poop” in 1,000 years of German history.

AfD MP Springer however said Germany’s lawmakers tend to cool it down away from the cameras, when the “tone towards us becomes more sober”.

But aside from the high-profile spats, the AfD has yet to make much of a mark when it comes to performing legislative duties.

AfD MPs are also routinely criticized for their lack of political experience and a thin grasp of policy issues.

“There’s a potential for more professionalism,” one AfD lawmaker admitted.

Nevertheless, said Nolte, “the AfD’s parliamentary group has shown itself to be a bit more stable, consistent and homogenous than some had predicted.” /cbb