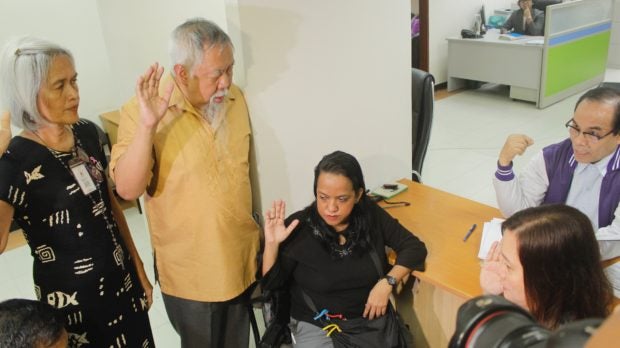 The Philippine Federation of the Deaf files a formal complaint before the Office of the Ombudsman against Asec. Mocha Uson regarding the controversial sign language video they claim very offensive to people with disabilities. INQUIRER.net photo / GABRIEL PABICO LALU

People advocating the causes of persons with disability (PWD) have asked President Rodrigo Duterte to fire Communications Assistant Secretary Mocha Uson after she and another blogger were seen in a video mocking those with hearing impairment.

Carolyn Dagani, president of the Philippine Federation of the Deaf, said on Thursday that they would like to see Mocha penalized for taking and uploading a video of blogger Drew Olivar, who did fake and “gibberish” hand signals for their “Pepederalismo for the deaf.”

“Maybe resign, taken out of position, whatever penalty will be determined,” she said before the complaint was filed before the Office of the Ombudsman against Uson and Olivar.

“We would like to see penalties applied if this is proven, and this would be an example for other [violators],” she added.

Lauro Purcil Jr. another complainant who is also the lead convenor of the Philippine Coalition on the United Nations Convention on the Rights of Persons with Disabilities, has also called on the President to act accordingly.

(I hope President Duterte would make a way to teach his own people, especially those with high positions in government, to respect Filipinos with or without disabilities.)

He noted that Uson’s actions put the current administration to shame.

(Especially her, she is in the department of information dissemination. Why is that she doesn’t have any ethics at all? She doesn’t have values and respect, not only for our sector, but as a representative of the government, she is putting our government to shame.)

(She is a ranking government official, and she should set a good example and  provide the right information that respects the deaf and those people like us with disabilities.)

This is not the first time that Uson and Olivar have been involved in a controversial video. In August, both were also criticized for their involvement in a lewd federalism promotion, prompting allies and critics of the administration to ask Uson to stay away from the proposal.