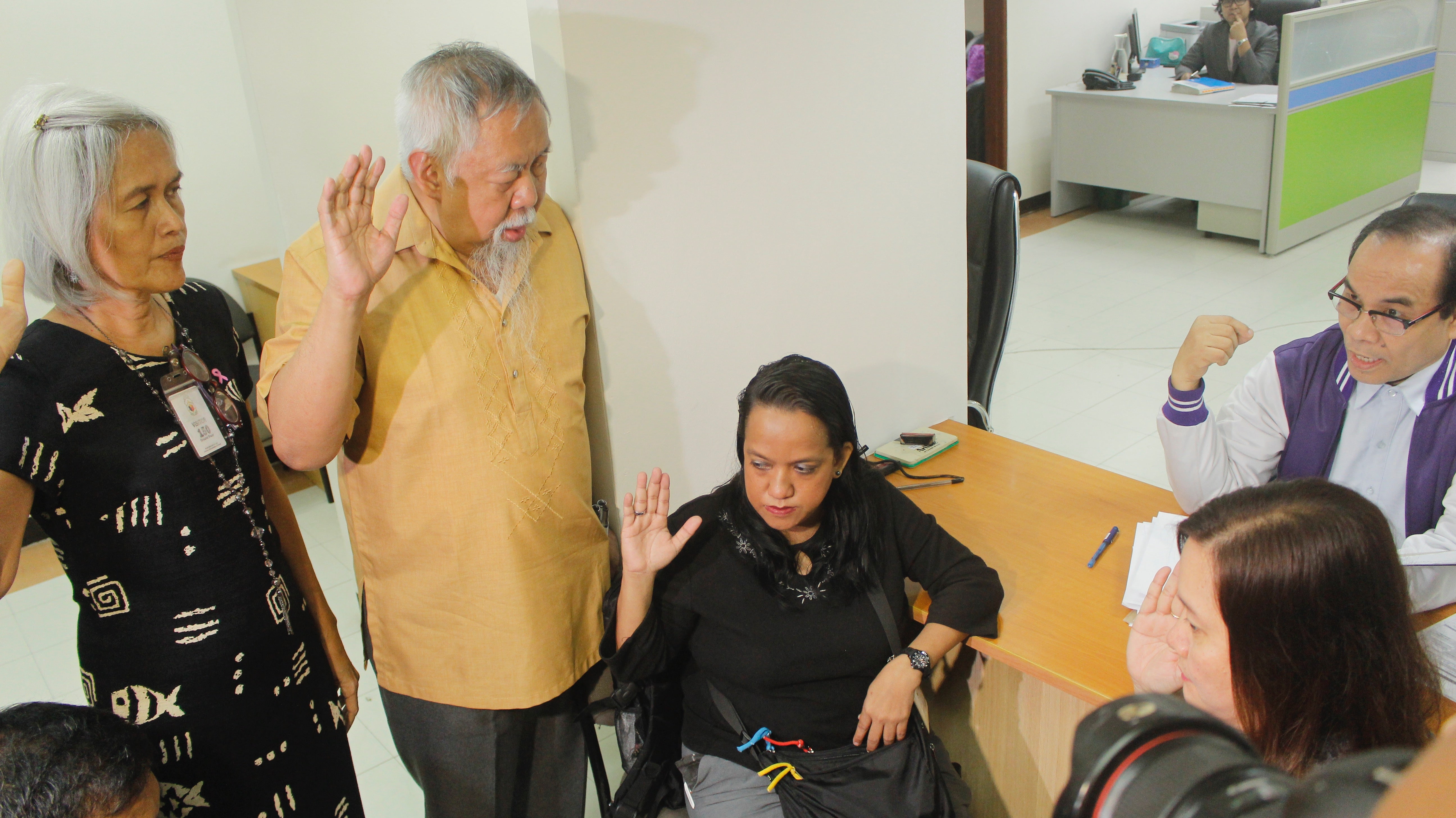 Philippine Federation of the Deaf files a complaint against Communications Assistant Secretary Uson and blogger Drew Olivar before the Ombudsman for alleged improper use of the sign language. (Photo by Gabriel Pabico Lalu /INQUIRER.net)

Advocates of deaf groups in the Philippine filed a complaint against Communications Assistant Secretary Mocha Uson and blogger Drew Olivar before the Ombudsman on Thursday, in response to their alleged improper use of the sign language.

In their complaint, deaf and hearing advocates from the Philippine Federation of the Deaf led by its president, Carolyn Dagani, founder Dr. Liza Martinez, and board members Hazel Bual and Lauro Purcil claimed that Uson and Olivar violated certain sections of R.A. 9442 which amended the Magna Carta for Persons With Disability, and the Code of Conduct for Government Officials.

The complainants said they are outraged by the video that showed Uson with blogger Drew Olivar as he performed hand gestures which the complainant said were not official sign language symbols.

“Though the video was short and barely a minute over, we are absolutely outraged by it.  We find it extremely offensive and derogatory, from so many different perspectives,” they said.

“It violates our rights as users of a legitimate language, as deaf Filipinos, as persons with disabilities, and as longtime volunteer advocates who have labored through decades to combat ignorance, stigma, and stereotypes by society,” they added.

Although Uson was not seen doing any “sign language,”  both she and Olivar drew flak from several individuals and groups, including Senator Nancy Binay and the Commission on Human Rights, for disrespecting and degrading the rights of deaf people.

They apologized on Wednesday with Olivar asking for understanding for being “insensitive and childish.”  Uson also posted a separate apology video intended for the deaf community.

This is not the first time the tandem drew flak for videos posted on social media.  In August, both were also criticized for promoting federalism through a lewd manner.

Proponents and advocates of federalism have asked the Uson to stay away from the issue, with some even asking her to take a leave from government.

According to Dagani and Bernardo, this latest video clip was also a part of the “Pepederalismo” campaign, and that this version was catered for deaf people.

“By no stretch of imagination does this video created by Ms. Uson and Mr. Olivar come even near to its purported ‘lecture series on federalism’, nor was it even intended ‘for Deaf people’ as they claim,” they explained.

“Clearly, they both exploited the attention and novelty of hand movements or their ‘signing’, simply for laughs and for entertainment and empty publicity,” they added. /muf