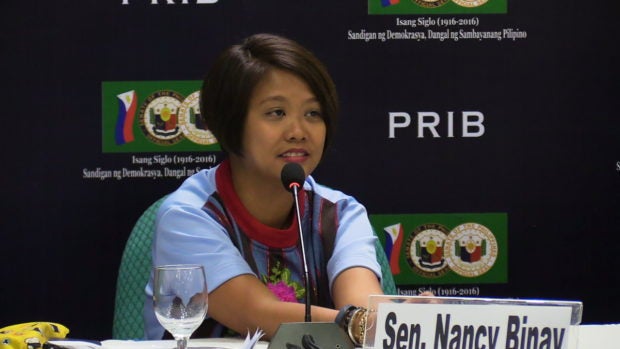 Senator Nancy Binay has been named as the new president of the United Nationalist Alliance (UNA) political party.

The selection of the new president was made during the UNA national leaders’ conference held in Makati last September 12, a party statement said on Thursday.

Lawyer JV Bautista, secretary general of UNA, said  the party leadership unanimously selected the senator “because her advocacies and programs go well with UNA’s vision of uplifting the lives of the marginalized..”

“We believe Senator Nancy’s advocacies and her unique brand of service will help unite members as we consolidate and forge alliances for the upcoming local and national elections,” Bautista said in the same statement.

The party national leadership is now composed of the following:

In her speech, the senator also  reminded her partymates of UNA’s program of government, which include “social inclusion/improvement of basic services,” “economic dynamism,” and “effective and caring governance.”

“We need to learn from our moments of doubt and make sure that the vision and platform of UNA shall remain relevant to the people,” Sen. Binay added.

She also urged her partymates to become instruments of “real change” in our society by advancing UNA’s core agenda of competence and service.

“As we undergo changes and reforms in this administration, our unity is now more important than ever. I, therefore, ask your continued support as we create practical solutions to address the root cause of our nation’s problems,” Binay said. /jpv