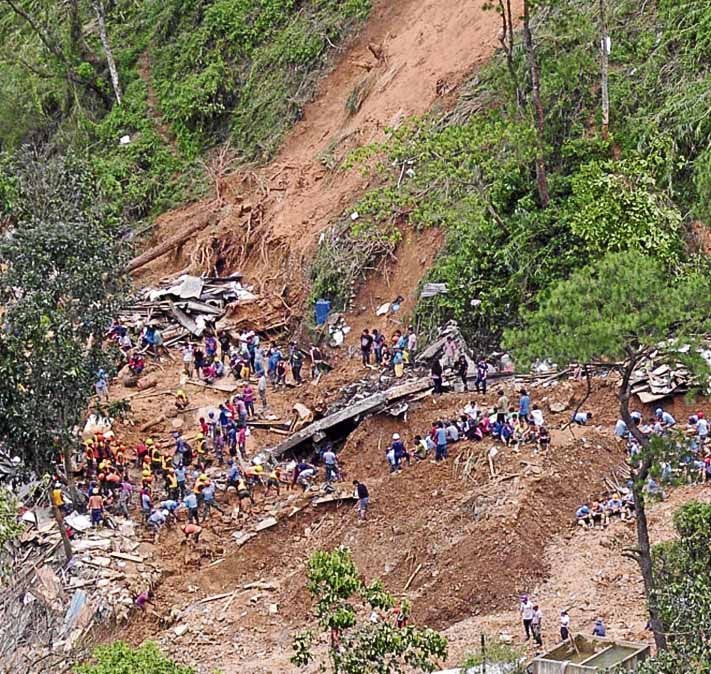 MORE BODIES RECOVERED Nineteen more bodies were dug out on Wednesday from the landslide-stricken community of small-scale miners in Itogon town, Benguet province, raising the number of fatalities there to 45. —RICHARD BALONGLONG

ITOGON, Benguet — A pet dog was found alive in the rubble four days after Typhoon “Ompong” triggered a killer landslide at Barangay Ucab here, buoying hopes that missing miners were still waiting to be rescued under tons of mud.

The dog’s rescue was announced by Ruben Carandang, Cordillera director of the Office of Civil Defense, at a briefing on Wednesday here.

The announcement prompted Mayor Victorio Palangdan to say: “While we have not found them, [the 59 missing people] are still considered alive.”

At noon on Wednesday, 19 more bodies were recovered from the landslide that dragged down houses and a chapel where pocket miners and their families took shelter when Ompong (international name: Mangkhut) blew through northern Luzon, including Benguet province.

The recovery of the bodies raised the number of fatalities here to 45.

The death toll in the Philippines from Ompong has risen to 81.

Some of the dead were discovered earlier in neighboring villages where they were washed down.

Carandang acknowledged that there was extremely low probability  of  finding survivors.

But Mayor Palangdan said the 200 rescuers who had been digging manually through the debris since Saturday were officially conducting search operations, not retrieval operations.

Soldiers, firemen, policemen, professional miners and residents made up the long lines of people digging with pick axes and shovels.

The miners were looking for friends and relatives, determined to make sure they received a proper burial.

Carandang said his men had found a stable path down the steep mountainside where they could transport backhoes to speed up recovery work.

Toll could go up

Ricardo Jalad, head of the Office of Civil Defense, said the death toll could still go up.

“If you add that to those already recovered it’s possible the toll could top 100,” Jalad said, referring to the 59 people still missing in Itogon.

Marlo Iringan, Cordillera director of the Department of the Interior and Local Government, said the number of missing people could still increase because more families were coming out to report relatives who had not surfaced since the typhoon struck.

About 1,478 Ucab residents have been staying at relocation sites. They include families who evacuated earlier before Ompong hit, or who fled following the landslide.

Benguet Gov. Crescencio Pacalso said no one was to blame for the landslide.

Pacalso said the weekslong monsoon rains in August saturated the mountains and the massive erosion was triggered by the heavy downpour brought by Ompong.

Jalad, also the NDRRMC executive director, said the local government of Itogon enforced preemptive evacuation but there were residents who refused to leave their homes.

A police officer, who tried to persuade residents to move to safety as Ompong approached, said on Tuesday that they refused to leave.

Senior Insp. Heherson Zambale said he was stunned after learning that the landslide had covered a chapel and bunkhouses at the mountain village where he and other officials had met with some of the victims a day before the tragedy struck on Saturday.

Zambale said he and other local officials tried to convince the villagers, mostly small-scale miners and their families, to move to a safer evacuation center as the typhoon approached.

A village officer who accompanied Zambale used a megaphone to warn people that Ompong was extraordinarily powerful and everybody should leave, he said.

The villagers told the policemen that they thought the chapel and nearby bunkhouses were on stable ground, and that they would only move away if the storm became severe, he said.

Zambale said he saw about 15 villagers outside the chapel and bunkhouses. “Some were smiling and there were some who were just quiet. Some were listening to us,” he said.

Some villagers heeded the warnings and left before the typhoon struck. “But many were left behind,” he said. —With reports from Jaymee T. Gamil, Jeannette I. Andrade, AFP and AP