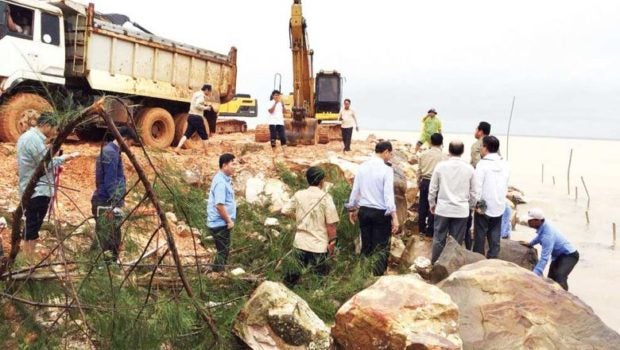 The Minister of Land Mangement Chea Sophara and his team inspect Prek Treng beach in Preah Sihanouk province’s Otres commune that has been illegally filled in.

PHNOM PENH — After receiving an order from Hun Sen, Minister of Land Management Chea Sophara led a team of experts and relevant officials to Sihanoukville to call a halt to the illegal development of a beach.

The prime minister ordered the Prek Treng beach in Otres commune to be restored to its previous condition, a press release from the Ministry of Land Management obtained by The Post on Tuesdaysaid.

“The ministry calls on landowners to be informed that filling in beaches [is not permitted],” the press release says.

Ly Chetniyum, the head of Preah Sihanouk province’s management and construction development office, said the team prevented one of the developers, who had already filled 30 meters of beach, from causing more damage and ordered all construction material removed.

“The owner must remove the construction erected on the [public] beach within 15 days. If the owner doesn’t abide by the order, provincial authorities will take action,” he said.

Chetniyum said the owner, Kan Sokhom, had planned to build a guesthouse or rental accommodation.

“The construction was to build rental accommodation or a guesthouse. When I inspected the site and prohibited construction, I saw there were six or seven toilets erected with [pipes going out into] the sea,” he said.

Sokhom, who was responsible for the construction on the public beach, said: “They asked us to stop, so we stopped.”

Khmer Rise Party president and a member of the prime minister’s recently formed Consultation Forum, Sok Sovan Vathana Sabung said he had investigated the site of the illegal filling in of Prek Treng beach near Sihanoukville on Tuesday.

“Our team are conducting a detailed investigation, looking into possible collusion or corruption by any authority in allowing a female tycoon, whose husband is a member of the Senate, to fill in land in violation of the [laws] of coastal area development,” he said.

He did not name the businesswoman involved or her husband.

“All corrupt government officials do not deserve the respect and trust of the people. We consider this violation to be systematic,” he added.

He called on Preah Sihanouk provincial governor Yun Min to strictly adhere to all regulations before approving investment licenses.

Minister of Tourism Thong Khon, who is also the vice-president of the National Committee on Coastal Area Management and Development (NCCMD), said the construction on Prek Treng beach violated the law on coastal area management issued by the government and NCCMD, which bans development within at least 100 metres of the beach.

He said the government would not allow anyone to destroy Cambodia’s beautiful coastal areas that attract so many tourists.

Read Next
Hanoi opens probe into deadly music festival
EDITORS' PICK
Irving out of game five clash with Bucks — Nets
US welcomes Duterte’s decision to hold off VFA termination for 3rd time
Ahead of ONE: Full Blast II, Mongkolpetch warns Elias Mahmoudi: ‘Watch out for my fists’
Synology NAS: A photo storage and multimedia server for your home
Alex Eala wins Grand Slam on Independence Day: ‘I hope I made my contribution to the country’
‘Magre-recalibrate tayo:’ Duterte directs more vaccines to areas with high COVID cases
MOST READ
‘Hindi pwedeng take 2,’ Sotto tells presidential, VP aspirants
Tighter curbs sought in provincial COVID-19 hot spots
Not even found in Tiktik: Another bad word snuck into DepEd materials
NCR Plus remains under GCQ from June 16-30
Don't miss out on the latest news and information.