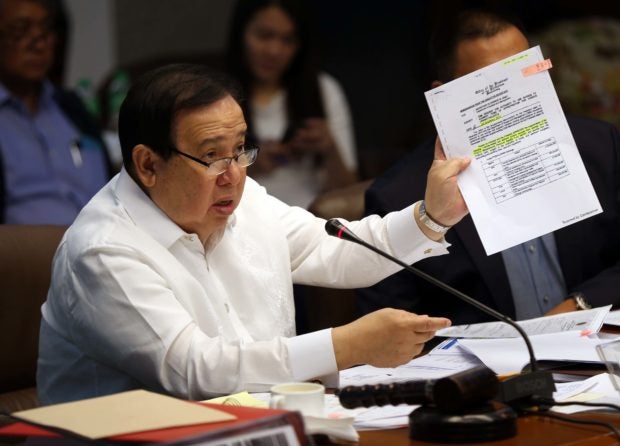 Senator Richard Gordon told the Philippine Drug Enforcement Agency (PDEA) on Wednesday to exert more effort to arrest a Chinese man allegedly involved in the smuggling of billions of pesos in illegal drugs into the country.

During a hearing of the Senate Blue Ribbon Committee, PDEA chief Director General Aaron Aquino said a certain Chan Yee Wah, alias KC Chan, Albert Chan, or Tony Chan, was a mediator of a drug syndicate suspected of bringing tons of shabu into the country.

Gordon, who chairs the committee, responded that the PDEA should strive to arrest and charge Chan. He suggested that they could put his picture in a Chinese newspaper or coordinate with Chinese officials in looking for him

“That is the kind of police work that we need to do. I’m sorry,” Gordon said.

“Get this guy because nagpasok ‘yan ng droga sa Pilipinas (because he smuggled drugs in the country). I cannot believe we cannot arrest him,” he told Aquino.

Chan was among four people charged for trying to smuggle 355 kilos of shabu worth P2.4 billion at the Manila International Container Port (MICP) last August 7. The drugs were concealed inside two metal magnetic lifters.

Two days later, PDEA agents found four more magnetic lifters, similar to those intercepted at the MICP, were found inside a warehouse in GMA, Cavite

The lifters in Cavite were empty but the PDEA expressed belief that it contained one ton of shabu worth P6.8 billion. Antidrug officials based their belief on a swab test and on the reaction of drug-sniffing dogs that sat beside the lifters. They said dogs sitting indicated the presence of drugs.

President Rodrigo Duterte rejected the assumption of the PDEA saying it was speculation, noting that no drugs were recovered. The Bureau of Customs also said that tests on the magnetic lifters showed them “negative” for shabu.

Gordon said the Senate would continue to grill people involved in the alleged smuggling incident until Chan is caught.

Aquino said they are already coordinating with authorities in Hong Kong to know the whereabouts of Chan.

In an earlier hearing, customs officer Jimmy Guban and consignee from SMYD Trading Marina Signapan were alleged of making a certain Joel Maritana, a scrapper from Cavite, to sign an affidavit that facilitated the entry of the shipment. /cbb