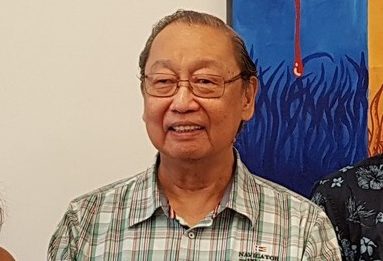 Communist Party of the Philippines founder Jose Maria ‘Joma’ Sison sent this recent photo of him from his base in Utrecht, The Netherlands. INQUIRER FILE

“May the negative example of the butcher general Palparan serve as a deterrent to human rights violations by military and police officers,” Sison said in an online interview from his base in Utrecht, The Netherlands.

Sison added: “Those who enjoy impunity for a certain period can be overtaken by those who fight for justice.”

He welcomed the conviction of Palparan, a known rabid nemesis of the CPP’s armed wing, the New People’s Army (NPA).

“I congratulate the families of the victims, their lawyers from the National Union of Peoples´ Lawyers and all the organizations and activists that have actively waged the campaign for justice,” the CPP leader said.

They were sentenced to reclusion perpetua, or 20 years and one day to 40 years imprisonment, and were ordered to pay P100,000 for civil indemnity and P200,000 for moral damages for each count.

Palparan had long been targeted by the NPA for assassination to pay for the death of Red fighters and mass activists during his reign as military commander in Southern Tagalog and other parts of the country.

But government authorities nabbed the elusive Army official in 2014 after three years of hiding, foiling the plan of the communist hit squad to kill him. /cbb