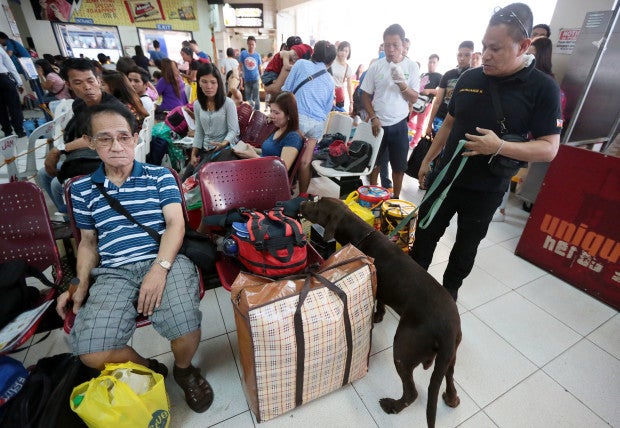 A police dog inspects bags at a bus terminal in Pasay City in this photo taken on March 22, 2016. Senator Manny Pacquiao wants the findings of drug-sniffing dogs, or of K-9 units, and the swabbing of drug samples to be admitted as evidence in drug cases. INQUIRER PHOTO / GRIG C. MONTEGRANDE

Senator Manny Pacquiao wants the findings of drug-sniffing dogs, or of K-9 units, and the swabbing of drug samples to be admitted as evidence in drug cases.

Through Senate Resolution No. 888, the neophyte senator prodded the Supreme Court to consider the issuance of Rules of Procedure that would allow the admission of such evidence as “competent evidence in drug cases.”

The high tribunal, he said, has the responsibility of issuing rules of procedure for the “presentation and admission of particular types of evidence as part of pleading and practice.”

In the resolution, Pacquiao noted a “recognized proliferation of drug and drug-related cases in the nation’s trial court system.”

“Notwithstanding the seriousness of these cases, they can drag and pend for some time to add more burden to the already clogged court dockets,” he said.

“It is conceivable that a significant number of these cases fail in prosecution not only because of mishandled evidence but also because of insufficiency of evidence,” the senator added.

And while law enforcement authorities have extensively used K-9 dogs and swabbing of samples to detect drugs and its residue, Pacquiao noted reports that the results of such evidence are not yet accepted as competent evidence in courts.

“These types of evidence, if accepted or admitted, may significantly support and strengthen the prosecution of drug and drug-related cases,” he pointed out. /cbb