Officials work to pinpoint cause of ’Armageddon’-like blasts in Massachusetts 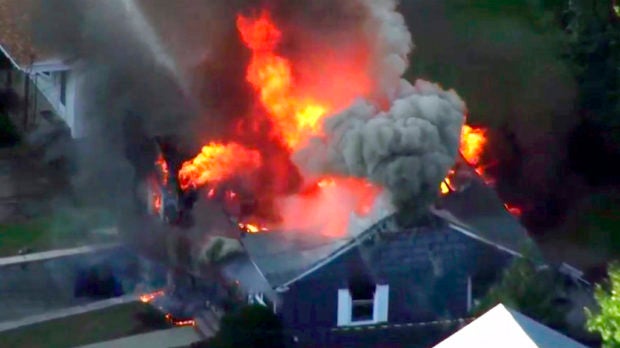 In this image take from video provided by WCVB in Boston, flames consume a home in Lawrence, Mass, a suburb of Boston, Thursday, Sept. 13, 2018. Emergency crews are responding to what they believe is a series of gas explosions that have damaged homes across three communities north of Boston. (WCVB via AP)

LAWRENCE, Massachusetts — Investigators worked Friday to pinpoint the cause of a series of dramatic natural gas explosions that killed a teenager who had just gotten his driver’s license and was sitting in his car, injured at least 25 others and left dozens of homes in smoldering ruins.

Authorities said an estimated 8,000 people were displaced at the height of Thursday’s post-explosion chaos in three towns north of Boston that were rocked by the disaster. Most were still waiting, shaken and exhausted, to be able to return to their homes.

The National Transportation Safety Board sent a team to help investigate, saying pipelines are within its jurisdiction.

The rapid-fire series of gas explosions that one official described as “Armageddon” ignited fires in 60 to 80 homes in Lawrence, Andover and North Andover, forcing entire neighborhoods to evacuate as crews scrambled to fight the flames and shut off the gas and electricity. Gas remained shut off Friday in most of the area, and the streets were eerily deserted.

Authorities said Leonel Rondon, 18, of Lawrence, died after a chimney toppled by an exploding house crashed into his car. He was rushed to a Boston hospital and pronounced dead there Thursday evening.

Rondon, a musician who went by the name DJ Blaze, had just gotten his driver’s license, grieving friends and relatives told The Boston Globe. “It’s crazy how this happened,” said a friend, Cassandra Carrion.

Massachusetts State Police urged all residents with homes serviced by Columbia Gas in the three communities to evacuate, snarling traffic and causing widespread confusion as residents and local officials struggled to understand what was happening. Some 400 people spent the night in shelters, and school was canceled Friday as families waited to return to their homes.

John Fluegge said he came home Thursday to find a note on the door of his apartment building saying everyone had to leave. A police officer directed him to North Andover’s high school, where he slept on a cot.

“You don’t know if your house is going to go up or your apartment,” he said. “It happened all of a sudden, no one knew how it started and everything.” His apartment was not damaged but he has still not been allowed to return because there is no power.

Gov. Charlie Baker said state and local authorities were investigating but that it could take days or weeks before they turn up answers, acknowledging the “massive inconvenience” for those displaced by the explosions. He said hundreds of gas technicians were going house to house to ensure each was safe.

The three communities house more than 146,000 residents about 26 miles (40 kilometers) north of Boston, near the New Hampshire border. Lawrence, the largest of them, is a majority Latino city with a population of about 80,000.

Lawrence Mayor Dan Rivera reassured immigrants who might not be living in his city legally that they had nothing to fear.

“Do not be afraid. Stay in the light. We will support you and your family,” Rivera said at a news conference Friday, speaking in English and Spanish. “Lawrence is one community.”

Authorities said all of the fires had been extinguished overnight and the situation was stabilizing.
Hours earlier, Andover Fire Chief Michael Mansfield described a starkly different situation.

“It looked like Armageddon, it really did,” he told reporters. “There were billows of smoke coming from Lawrence behind me. I could see pillars of smoke in front of me from the town of Andover.”

The Massachusetts Emergency Management Agency blamed the fires on gas lines that had become over-pressurized but said investigators were still examining what happened.

Columbia had announced earlier Thursday that it would be upgrading gas lines in neighborhoods across the state, including the area where the explosions happened.

It was not clear whether work was happening there Thursday, and a spokeswoman did not return calls seeking comment.

Aerial footage of the area showed some homes that appeared to be torn apart by blasts.

Joseph Solomon, the police chief in nearby Methuen, said 20 to 25 homes were on fire in Lawrence when he responded to help. He said there are so many fires “you can’t even see the sky.”

In one neighborhood of the affected area, police, firefighters and utility crews were going door-to-door, checking to make sure it was safe for residents to return home. The fire crews were from as far away as Foxborough and Oxford in central Massachusetts.

Brenda Charest stood anxiously on her front porch while a crew checked her undamaged home before giving her the all-clear to return Friday. On Thursday, she had come home to a hissing sound in her basement and a strong odor of natural gas.

“We took off. I said, ’Pack up, we’re out of here,’” said Charest, who went with her 93-year old father and cat to a relative’s home. “It was scary. We didn’t know anything.”

Gas explosions have claimed lives and destroyed property around the US in recent years:

— In 2016, a buildup of natural gas triggered an explosion and fire that killed seven people in apartments in Silver Spring, Maryland.

— In 2014, a gas explosion in New York City’s East Harlem neighborhood killed eight people and injured about 50. Consolidated Edison later agreed to pay $153 million to settle charges after the state’s Public Service Commission found it had violated state safety regulations. A gas leak had been reported before that blast.