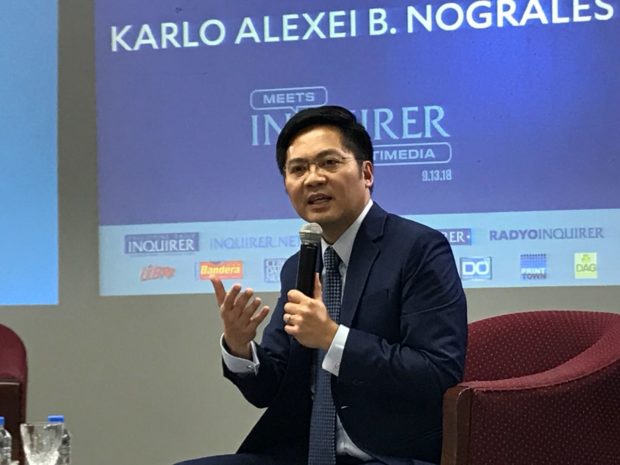 There are no funds in the proposed 2019 budget that could be considered “pork” or those that could go to pet projects of certain government officials, Davao City Rep. Karlo Nograles said Thursday.

Nograles, the chairperson of the House Committee on Appropriations, made this assurance during the Meet Inquirer Multimedia forum as Senator Panfilo Lacson earlier revealed that billions of pesos in funds are considered “pork” in the proposed 2019 national budget.

READ: Lacson: Hundreds of billions in ‘pork’ hidden in 2019 budget

“So, no way in any way can we put PDAF here in the budget,” he said.

Nograles further said Lacson’s allegation regarding the budget is an “ongoing debate year in and year out.”

According to Nograles, it is the executive branch of the government that proposes the budget according to projects identified by government agencies, and that Congress only dissects the proposal.

“The budget came from the executive, and it is given to us in Congress for us to scrutinize,” he pointed out.

He, however, admitted that certain lump sums exist in the proposed 2019 budget, but those are only for calamity funds.

“(There are) calamity funds because you cannot predict how much you will need for calamity and we cannot predict what sort of calamity would come on a given year. So, there has to be some sort of flexibility,” he said.

The House of Representatives is set to begin its plenary debates on the proposed 2019 national budget on September 17. /kga