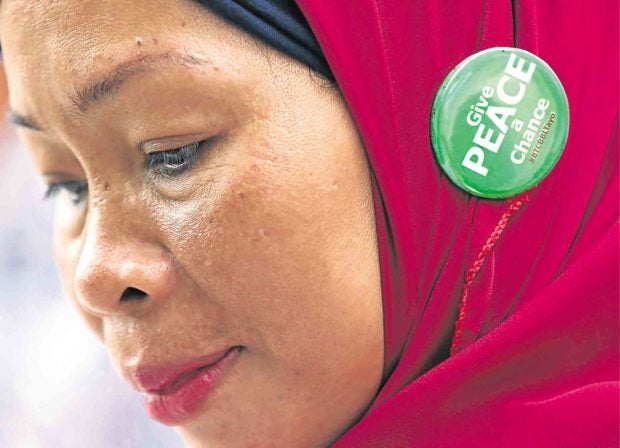 PEACE ADVOCATE A Muslim woman joins a gathering in Metro Manila in July to call for peace as lawmakers discuss the proposed law creating a new Bangsamoro region. —LYN RILLON

KORONADAL CITY — From bullets to ballots.

The special registration was held in the Autonomous Region in Muslim Mindanao (ARMM) and other areas in the proposed new Bangsamoro region specifically for the plebiscite to ratify the Bangsamoro Organic Law (BOL).

Al Haq said the ratification of the BOL would answer the centuries-old quest of the Bangsamoro people for recognition. He said they were expecting “99 percent” of their 40,000 fighters to register.

“We want to get as many potential voters involved in the plebiscite in consonance with the spirit of the Bangsamoro Organic Law,” he said.

President Rodrigo Duterte, speaking before the Filipino community in Jordan on Sept. 7, vowed to campaign for the BOL ratification in the plebiscite scheduled on Jan. 21, 2019.

Sumalipao said the satellite registration centers would accommodate applications for voter’s registration, transfer of registration, reactivation, change, or correction of entries and inclusion, or reinstatement of records.

The special satellite registrations will be held in the provinces of Lanao del Sur, Maguindanao, Basilan, Sulu, Tawi-Tawi, Lanao del Norte and North Cotabato, and in the cities of Cotabato and Isabela.

ARMM has a population of 4 million, based on the 2015 census of the Philippine Statistics Authority.