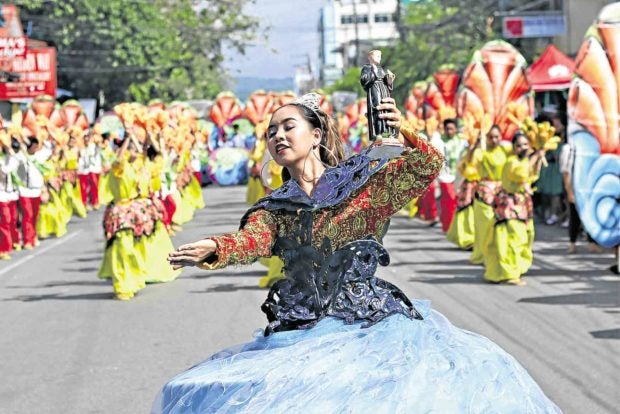 SURIGAO CITY — Around 70,000 people trooped to this city last week for the annual thanksgiving festival honoring the city’s patron saint, who locals believed had protected Surigao from natural disasters.

“We are thankful that our city has been spared from death and devastation,” she said.

She said 19 teams from Caraga region and Misamis Oriental province joined the street dancing for the Bonok-Bonok Maradjaw Karadjaw Festival on Sept. 9.

“‘Bonok’ [means] heavy downpour. The pouring of rain, for us, signifies a blessing from the sky. Bonok-Bonok, which repeats the word, means [continuous] pouring of blessings,” said Merlin.

Local historians traced the festivity back to the tradition of early indigenous settlers, the Mamanwa and Manobo, who used to dance as they prayed for rain.

Merlin said September, back then, used to be part of the dry months.

“The climate and the dry and wet season [pattern] might have changed but the tradition remained,” she said.

Merlin said this tradition was adopted by early Christians who linked it to the feast of St. Nicolas de Tolentino.

Mayor Ernesto Matugas said the city was “aiming high” to make the festival known in the country and introduce it to other countries.

He said the city government set aside P5 million to stage the festival.

Read Next
Dalian trains to undergo nighttime simulation tests
EDITORS' PICK
Duterte insists: We weren’t slow to respond to COVID-19 threat in 2020
Duterte: Authorities may take over hotels, but it’s not a ‘remedy’ in a democracy
Smart introduces Smart Barkada with the launch of Double GIGA
Smart is fastest 5G Network in PH – Ookla
When will PH get enough COVID-19 vaccines? ‘I really don’t know,’ Duterte says
LT Group, Inc. Notice of Annual Shareholders’ Meeting 2/2
MOST READ
‘Duterte a total failure as leader. He must step down’ – group
Duterte ‘privately’ dealing with China invasion in West PH Sea – Palace
Ramon Tulfo says gov’t running PH like a ‘headless chicken’
Stop acting like a colonizer, PH business groups tell China
Don't miss out on the latest news and information.

Duterte insists: We weren’t slow to respond to COVID-19 threat in 2020