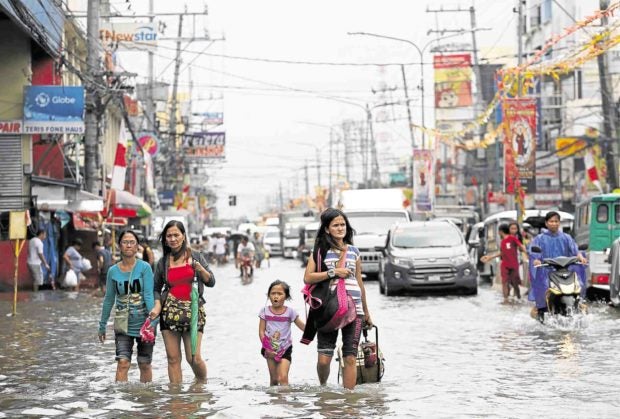 MURKY WATERResidents risk getting diseases as they wade through a flooded street in Balagtas town, Bulacan province. —LYN RILLON

The fatalities were residents of Hagonoy town in Bulacan, Angeles City in Pampanga and Paniqui town in Tarlac, according to Dr. Jessie Fantone, spokesperson for the Department of Health (DOH) in the region.

The DOH noted the rise in the number of cases as rains spawned by the southwest monsoon and four tropical depressions flooded many parts of Central Luzon in the last two months.

Since January, 247 leptospirosis cases had been recorded in the region, 74 percent higher compared to the same period in 2017, Fantone said.

A total of 13 deaths from the disease occurred in the last eight months, seven of them in Nueva Ecija province.

In Pangasinan province, the number of leptospirosis cases from Jan. 1 to Aug. 27 had reached 207, more than the 88 recorded on the same period last year.

Twenty-six people had died because of the disease, compared to the 13 deaths recorded on the same period last year. Dagupan City posted 60 cases with six deaths, the highest in the province. —Reports from Tonette Orejas and Gabriel Cardinoza