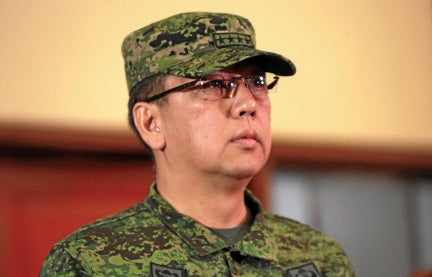 The Armed Forces of the Philippines has deferred court-martial proceedings against Sen. Antonio Trillanes IV to wait for the Supreme Court decision on his petition for the invalidation of President Duterte’s order voiding the amnesty given to him as a military rebel in 2011.

In a statement on Sunday, Gen. Carlito Galvez Jr. said: “The AFP submits to the majesty of the Supreme Court and yields to its wisdom as it tackles the petition pertaining to Presidential Proclamation No. 572 filed by Senator Trillanes.”

“We hope other parties [will] follow,” said the AFP chief of staff.

“With the recent pronouncement of the Chief Executive, general court-martial proceedings will be held in abeyance until the Supreme Court has ruled on the legality of Presidential Proclamation 572,” he added.

President Duterte has stepped back from the confrontation with his archcritic to give way to the legal process, ordering the military and the Philippine National Police not to arrest Trillanes without a court-issued warrant.

The Department of Justice (DOJ) has applied for a warrant with the Makati Regional Trial Court (RTC) Branch 148, which has set a hearing for Sept. 13.

The DOJ has also asked the Makati RTC Branch 150 to reopen Trillanes’ rebellion case, but the court has not responded pending a look at the case.

Both courts dismissed the charges against Trillanes in 2011 after he was granted amnesty.

The head of the Department of National Defense temporary committee that processed the applications for amnesty of Trillanes and other participants in the 2003 Oakwood mutiny, the 2006 Marines standoff, and the 2007 Manila Peninsula siege maintained on Sunday that Trillanes applied for amnesty, contrary to the government’s claim that he did not.

In a message to reporters, former Defense Undersecretary Honorio Azcueta said, “I can honestly say that as chair of the ad hoc committee on amnesty, I conscientiously did my job in accordance with Proclamation No. 75 and its rules.”

Azcueta was referring to former President Benigno Aquino III’s 2010 offer of amnesty to participants in military uprisings against his predecessor, Gloria Macapagal-Arroyo.

The amnesty committee was tasked with receiving and processing applications for amnesty for the subsequent approval of the defense secretary.

Azcueta said Trillanes “obviously” applied for amnesty. “That’s why on record he was granted amnesty.”