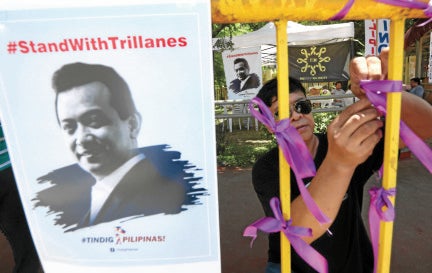 SOLIDARITY A supporter of Sen. Antonio Trillanes IV ties purple ribbons to the gate of the Senate building as symbols of solidarity as the lawmaker awaits an arrest warrant from the courts after President Duterte revoked his amnesty last week. —MARIANNE BERMUDEZ

Several days of holing up in his Senate office might be taking its toll on Sen. Antonio Trillanes IV, who was reportedly feeling unwell.

Magdalo Rep. Gary Alejano, who came to visit on Sunday, said the senator was a bit under the weather.

“He has a cold because he has been very tired. Day and night, he’s talking to someone or having interviews, so that’s very tiring,” Alejano told reporters.

At around noon on Sunday, the senator came out of his office to check where the members of the media, who have been staking out his office, were resting.

“I slept well last night … I’m doing better,” Trillanes said, as he briskly walked back to his office.

He maintained that he could not turn himself in since it would boost the allegations in President Rodrigo Duterte’s proclamation that revoked his amnesty.

Alejano said Trillanes was being given time to rest, as he had been having a tough time since Tuesday.

The senator has been staying in his office since Tuesday when the President revoked his amnesty.

Despite the President’s pronouncement that he would not order the senator’s arrest without a warrant from the court, Alejano said he could not trust the President’s word.

“You cannot really trust the President because the police and military were not yet given orders to go home or not to arrest him,” he said.

Alejano added that Trillanes would go with the arresting team peacefully as long as it had a legal, valid arrest warrant.

But the scrapping of Trillanes’ amnesty must first be challenged and he must be given a chance before the courts to present his evidence.

“Once the amnesty is invalidated, that’s the basis to revive the cases, then to issue the arrest warrant. But what they did was a shortcut,” Alejano said.

He dismissed as harassment the string of cases being lodged against Trillanes in the past week, such as the libel complaint filed by the President’s eldest son, Paolo Duterte.

“It will not stop Trillanes from doing his mandate to be the voice of the people as a senator of the opposition. If we become all scared, who will speak up?” Alejano added.