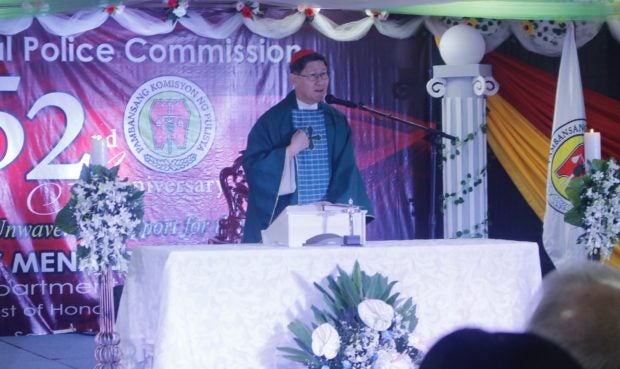 Manila Archbishop Luis Antonio Cardinal Tagle reminded government employees and officials that they could not play God in interpreting and enforcing the law.

“Let us not pretend that we can read the minds and hearts of people. In other words, we cannot play God,” Tagle said during the mass held on Friday on the 52nd anniversary of the National Police Commission (Napolcom).

“The scribes and the Pharisees were so eager with implementing the law according to their interpretation, and in the end, they were the ones who brought Jesus to trial. They put the law-giver to test,” he explained.

He also warned that wrongdoers in government who manage to evade the laws of the land will still be judged in the afterlife.

“All of us are accountable to God. Even those who can run away from human laws, in the end, cannot run away from God who sees the heart and who is the real law-giver,” Tagle, a staunch critic of the administration’s war on illegal drugs, claimed.

While Tagle has admitted that working for Napolcom itself entails judgment, he asked the commission to work cautiously.

“So sometimes you have to make some decisions. But we are being reminded by the readings of today, be cautious and humble,” he added.

In the middle of his sermon, Tagle joked that he was wary if Napolcom would still invite him to celebrate mass in the future, after everything that he said.

“Parang hindi na yata ako maiimbitahan dito (I may no longer be invited here),” he said, again eliciting laughter from the crowd.

Tagle asked people from the Napolcom to judge fair and square. He referenced his call for fair judgment through a story of him in his younger years, where he was scolded by a woman who mistook him as a mere commuter because of his clothing.

Tagle said that to the horror of the woman, he turned out to be the mass celebrant in her community.

( I am not saying that we lose decorum, but just a reminder: Sometimes we are very swift to judge, but we do not know, we have not talked [with those we are judging])

“And that’s what we call prejudice. It becomes discrimination,” he added.