Skateboarder Didal does the 'dab pose' with senators | Inquirer News

Skateboarder Didal does the ‘dab pose’ with senators 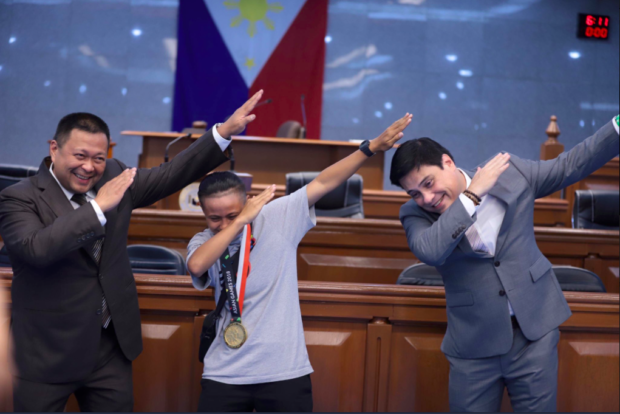 Ejercito posted the photo on his Twitter account on Thursday morning, with the caption: “Doing the “Dub” during a light moment with Cebuana skateboarder and Asian Games Gold medalist Margielyn Didal and seatmate Majority Leader Sen. Migz Zubiri.”

According to online dictionaries, “dabbing, or the dab, is a simple dance move in which a person drops the head into the bent crook of a slanted arm, typically while raising the opposite arm in a parallel direction but out straight; both arms are pointed to the side and at an upward angle.” It is also being used as a gesture of triumph.

Didal used the dab pose whenever she successfully accomplished skateboarding moves during the Asian Games competition.

The Cebuana skateboarder made waves in social media after her superb performance in the women’s street event in the 2018 Asian Games which gave the Philippines its fourth gold medal.

The 2018 Asian Games medalists will be awarded cash incentives from the government and other private donors on September 12.

After making history in Palembang, the first Filipina Asiad skateboarding champion is now focusing her sight on the 2020 Tokyo Olympics where she seeks to become not only the first-ever female skateboard gold medalist in the quadrennial meet but also the country’s first Olympic gold medal winner. /jpv