Trillanes warns gov’t lawyers backing his ‘bogus’ arrest: ‘I will run after you’ | Inquirer News

Trillanes warns gov’t lawyers backing his ‘bogus’ arrest: ‘I will run after you’

Senator Antonio Trillanes IV on Thursday threatened to run after government lawyers pushing for his arrest following the order of President Rodrigo Duterte voiding the amnesty granted to him in 2010.

“Ako hahabulin ko ‘yang mga ‘yan (I will run after you),” he said in a press briefing outside his office at the Senate in Pasay City.

Trillanes said Justice Secretary Menardo Guevarra, Solicitor General Jose Calida, and other government lawyers can be sanctioned for participating in the plan for his “bogus” arrest after Duterte‘s term ends.

He said he plans to file cases against them once Duterte steps down from office.

“Pag wala na si Duterte (If Duterte is gone), no one will protect them,” he said.

“Pagdating ng panahon, ‘pag wala na si Duterte, hahabulin ko talaga sila pagka they insist dito sa ginagawa nilang kalokohan (When the time comes, if Duterte is already out of office, I will really run after them, if they insist in this nonsense),” Trillanes stressed. 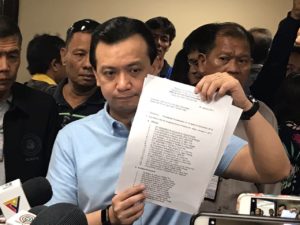 Senator Antonio Trillanes IV presents to the media at the Senate on Thursday, September 6, 2018, documents that he said would prove that he filed an application for amnesty, which was granted to him in 2010. INQUIRER.net photo / Cathrine Gonzales

Trillanes further pointed out that Mr. Duterte would not be able to protect Guevarra and Calida, once his term is over since the President might also face charges after his presidency.

(Guevarra and Calida will scamper after Duterte’s term because he will not help them since even Duterte will be chased after. He has a lot of crimes.)

The senator also asserted that Guevarra, Calida, and the other lawyers should be disbarred from service due to their actions against him.

“They should be disbarred from practicing the legal profession kasi (because) they are supposed to oversee or protect rights, my rights,” he said.

Trillanes emphasized that government authorities should not take advantage of their positions to “persecute” critics of the administration. /kga