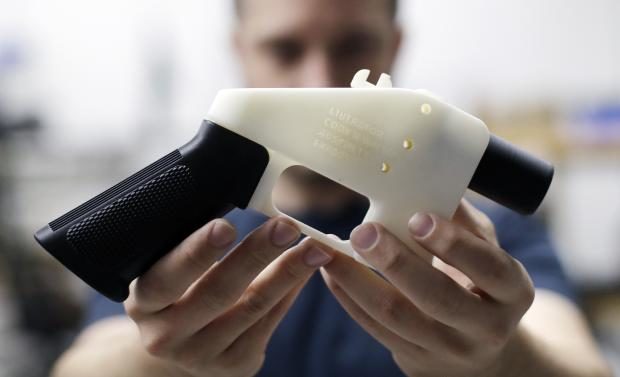 In this photo, taken Aug. 1, 2018, Cody Wilson, with Defense Distributed, holds a 3D-printed gun called the Liberator at his shop in Austin, Texas. AP

CHICAGO, United States – A Texas man on Tuesday began selling digital gun-making blueprints, including for a 3D-printed plastic handgun, despite a judge’s order barring the distribution of the material.

Cody Wilson had initially published the downloadable files on his website four weeks ago, after a deal struck with the Donald Trump administration that ended the federal government’s efforts to block him.

A federal judge issued a temporary order on July 31 barring the distribution of the digital blueprints, and on Monday extended that order until the states’ lawsuit is adjudicated.

Wilson told a news conference Tuesday that he interpreted the judge’s ruling as only barring the free online distribution of the blueprints. He instead began to offer the files for sale, and promised to send physical copies on flash drives or by email.

Visitors to his online marketplace, which was once again active Tuesday, could name their own price for the information.

“Everyone in America who wants these files will get them,” Wilson said. “I’m happy now to become the iTunes of downloadable guns, if I can’t be the Napster.”

Wilson insisted that the digital files had already been available elsewhere online for years, and that barring him from distributing the content was akin to free speech censorship.

Seattle-based US District Judge Robert Lasnik said in his Monday ruling that free speech rights were “dwarfed” by the harm that Wilson’s actions could cause.

“The very purpose for which the private defendants seek to release this technical data is to arm every citizen outside of the government’s traditional control mechanisms of licenses, serial numbers, and registration,” Lasnik wrote in his ruling.

“It is the untraceable and undetectable nature of these small firearms that poses a unique danger.” /cbb